Tune in to SciFri on September 5, 2014 to hear Randal Munroe ponder zany math and science questions like the one below.

Q. What would happen if you tried to hit a baseball pitched at 90 percent the speed of light? — Ellen McManis

Let’s set aside the question of how we got the baseball moving that fast.

We’ll suppose it’s a normal pitch, except in the instant the pitcher releases the ball, it magically accelerates to 0.9c. From that point onward, everything proceeds according to normal physics.

A. The answer turns out to be “a lot of things,” and they all happen very quickly, and it doesn’t end well for the batter (or the pitcher). I sat down with some physics books, a Nolan Ryan action figure, and a bunch of videotapes of nuclear tests and tried to sort it all out. What follows is my best guess at a nanosecond-by-nanosecond portrait.

The ball would be going so fast that everything else would be practically stationary. Even the molecules in the air would stand still. Air molecules would vibrate back and forth at a few hundred miles per hour, but the ball would be moving through them at 600 million miles per hour. This means that as far as the ball is concerned, they would just be hanging there, frozen.

The ideas of aerodynamics wouldn’t apply here. Normally, air would flow around anything moving through it. But the air molecules in front of this ball wouldn’t have time to be jostled out of the way. The ball would smack into them so hard that the atoms in the air molecules would actually fuse with the atoms in the ball’s surface. Each collision would release a burst of gamma rays and scattered particles.**

Randall Munroe Asks, ‘What If?’ 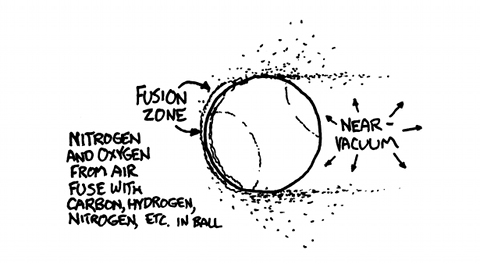 These gamma rays and debris would expand outward in a bubble centered on the pitcher’s mound. They would start to tear apart the molecules in the air, ripping the electrons from the nuclei and turning the air in the stadium into an expanding bubble of incandescent plasma. The wall of this bubble would approach the batter at about the speed of light—only slightly ahead of the ball itself.

The constant fusion at the front of the ball would push back on it, slowing it down, as if the ball were a rocket flying tail-first while firing its engines. Unfortunately, the ball would be going so fast that even the tremendous force from this ongoing thermonuclear explosion would barely slow it down at all. It would, however, start to eat away at the surface, blasting tiny fragments of the ball in all directions. These fragments would be going so fast that when they hit air molecules, they would trigger two or three more rounds of fusion.

After about 70 nanoseconds the ball would arrive at home plate. The batter wouldn’t even have seen the pitcher let go of the ball, since the light carrying that information would arrive at about the same time the ball would. Collisions with the air would have eaten the ball away almost completely, and it would now be a bullet-shaped cloud of expanding plasma (mainly carbon, oxygen, hydrogen, and nitrogen) ramming into the air and triggering more fusion as it went. The shell of x-rays would hit the batter first, and a handful of nanoseconds later the debris cloud would hit.

What If?: Serious Scientific Answers to Absurd Hypothetical Questions

When it would reach home plate, the center of the cloud would still be moving at an appreciable fraction of the speed of light. It would hit the bat first, but then the batter, plate, and catcher would all be scooped up and carried backward through the backstop as they disintegrated. The shell of x-rays and superheated plasma would expand outward and upward, swallowing the backstop, both teams, the stands, and the surrounding neighborhood—all in the first microsecond.

Suppose you’re watching from a hilltop outside the city. The first thing you would see would be a blinding light, far outshining the sun. This would gradually fade over the course of a few seconds, and a growing fireball would rise into a mushroom cloud. Then, with a great roar, the blast wave would arrive, tearing up trees and shredding houses.

Everything within roughly a mile of the park would be leveled, and a firestorm would engulf the surrounding city. The baseball diamond, now a sizable crater, would be centered a few hundred feet behind the former location of the backstop.

Major League Baseball Rule 6.08(b) suggests that in this situation, the batter would be considered “hit by pitch,” and would be eligible to advance to first base.

**After I initially published this article, MIT physicist Hans Rinderknecht contacted me to say that he’d simulated this scenario on their lab’s computers. He found that early in the ball’s flight, most of the air molecules were actually moving too quickly to cause fusion, and would pass right through the ball, heating it more slowly and uniformly than my original article described.

Excerpt from What If? by Randall Munroe to be published by Houghton Mifflin Harcourt on September 2nd, 2014. Copyright © 2014 by xkcd Inc.. Used by permission of the author. All rights reserved.

Randall Munroe Asks, ‘What If?’

In his new book "What If?", xkcd comic artist Randall Munroe answers his readers' hypothetical questions with math and science.