This educational resource is part of the Silk spotlight

Most of us are familiar with silk as a fine fabric that is made into neckties and dresses. As a textile, silk is highly valued because it is shiny and smooth, strong yet lightweight, and it can be easily dyed or treated to take on the color or chemical properties of other substances. These well-known properties led scientists to develop new products from silk, including important medical materials such as replacement cartilage, surgical sutures, and small spheres that can be used to deliver drugs to certain parts of the body (not all of these are available yet on the market). What many people do not realize is that the small silk fibers that give silk its desirable characteristics come from the mouths of caterpillars called silkworms.

The silk used by humans comes from the domesticated silkworm, Bombyx mori. The silkworm is the caterpillar of a moth in Lepidoptera, the order of insects that includes moths and butterflies. Lepidoptera are holometabolous insects, which means that they undergo a complete metamorphosis during their lifetime. Just like butterflies, silkworm moths begin their life as an egg that then hatches into a growing, feeding caterpillar. When a silkworm has eaten enough, it constructs a cocoon made out of silk fibers, and inside that cocoon it turns into a pupa. After many days, a fully formed adult silkworm moth emerges through a spit-soaked opening in the bottom of a cocoon.

Dissecting a silkworm cocoon before the adult has emerged provides many clues about the transformation of a silkworm into an adult moth—a change that is normally impossible to view through the walls of a cocoon once it has been constructed. In this activity, you’ll learn about the insect origins of silk by dissecting a cocoon and “degumming” it to reveal the protein, called fibroin, that scientists use for constructing new materials.

Non-living, unemerged, silk cocoons – one or two per experimenter

4-6 inch square of cardboard or corkboard for pinning

Beaker and hotplate, or saucepan and stove

If you need help finding silkworms, try one of these online suppliers: Mulberry Farms, The Silkworm Shop, Oregon Silk Worms. You can download the silk cocoon dissection sheet here.

Cocoon Exterior – What is on the outside of a cocoon?

A silkworm constructs its cocoon from the outside in, starting with a quick scaffold that it can easily rest upon while weaving and that will ultimately secure the cocoon to surrounding plants. The silk used to make the cocoon starts out thick but gets thinner and thinner as the silkworm works its way into the center of the cocoon.

Cocoon Interior – What’s inside of a cocoon?

After constructing its cocoon, the silkworm caterpillar is fully encased inside. There, it will gradually stop moving and shed its skin-like caterpillar exoskeleton to emerge as a pupa, the intermediate phase between the caterpillar and the adult moth. The exoskeleton, called exuvia, is left in the bottom of the cocoon. A silkworm pupa already looks more like an adult than a caterpillar, with a shortened, segmented body, a clearly defined head, and the beginnings of what will be the adult legs. It takes the pupa approximately two weeks to develop into an adult moth.

Cocoon Interior – How is interior silk different from exterior silk?

The silk used to construct a cocoon is actually a single, continuous thread that can be over 900m long. The silkworm weaves its cocoon from the outside in, laying down silk in figure-eight patterns. As it does this, the silk fiber gets thinner and thinner.

Degumming your silk cocoon: How is silk processed for human use? 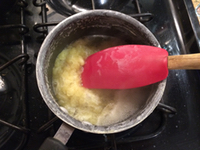 The silk begins in the salivary glands of a silkworm as a clear, gooey liquid made of a strong protein called fibroin and a sticky protein called sericin. When it comes out of the silkworm’s salivary glands and is exposed to air, the mixture starts to solidify, changing from viscous liquid to a strong, stretchy fiber. The sericin, which coats the outside of the silk fiber, is important for cocoon construction because it helps the layers of silk adhere to one another to create a solid cocoon wall.

For human use as a textile and biomedical material, however, silk is most useful if the sericin coating that surrounds the fibroin fiber is removed before further processing. To do this, silk cocoons are usually boiled in a mild basic detergent. The process, called “degumming,” is what you just did with your detergent. Degumming dissolves the yellowish sericin in water and leaves behind white, wet, fibroin strands.

Scientists are researching the various ways silk fibroin can be used to make new materials and devices with different properties and applications. In order to build new materials out of silk, they must first dissolve the degummed silk fibers to create an aqueous fibroin solution. From that point, they can process the silk fibroin solution into many different and adaptable materials. Watch the Science Friday Video “The Medical Wonders of Worm Spit” and read “The Silk Road’s Turn Toward Biotechnology” to learn more about a group of scientists engineering new materials from silk.

The Silky Wonders of Worm Spit

The Silk Road’s Turn Toward Biotechnology

Using a protein found in silkworm moth cocoons, researchers at Tufts University in Boston are developing a range of biodegradable materials and therapeutic devices.