This 3D model shows the beak of a Humboldt squid.

You can click on the 3D model above and take a look at it from all angles by clicking and dragging, or zoom in and out.

The Humboldt or jumbo squid (Dosidicus gigas) can grow to have mantle length of over 750 millimeters (30 inches), can swim over 15 miles per hour, and is found throughout the eastern Pacific ocean. Its sharp beak, which is located in the center of the region where its arms meet its head, is used by Dosidicus for feeding on smaller fish, invertebrates, and even occasionally members of its own species.

Learn more about the basics of squid anatomy and diversity here.

Like most of the 300 or so other species of squid, Dosidicus is also a very important prey species for other marine predators including sperm whales, giant squid, and various fish species such as tuna and swordfish. Understanding how many, and what species of squid are consumed by other predators can help marine biologists as well as commercial fisheries better understand the ocean’s food webs.

When marine biologists want to figure out how much and what species of squid marine predators eat, it is usually not possible to track the predators closely enough to observe their eating behavior. For example, some predators, like the colossal squid (Mesonychoteuthis hamiltoni), have only been observed alive in the wild a handful of times, while other predators like the sperm whale (Physeter macrocephalus) can dive over 1000 meters into the ocean to hunt for their prey. So how do marine biologists figure out how much squid a predator like a sperm whale, eats?

They identify, count, and measure the squid beaks inside of it.

How to estimate the number of squid a sperm whale eats

Though a bit disgusting, two simple methods are available to marine biologists who want to figure out what an ocean predator has eaten: sample the feces it leaves behind, or explore the predator’s stomach and intestines after it dies. However, there’s a major challenge with these two approaches—squid are digested very easily. When a researcher examines the stomach contents or feces of say, a sperm whale, the only squid evidence remaining are the beaks. The good news is that these undigested beaks can be used to try to infer the species and size of the squid that that they came from.

Every species of squid has a unique beak shape, and with a little experience and a field guide, most species can be identified by their beaks alone. After every beak in a sample has been identified and counted, researchers can form some estimate of the number of squid that a predator has recently consumed.

But it’s not the just number of beaks that counts, it’s the size of them!

The number of squid that a predator eats doesn’t necessarily tell you how much squid it ate, does it? After all, eating two cupcakes is very different from eating two full-size wedding cakes! 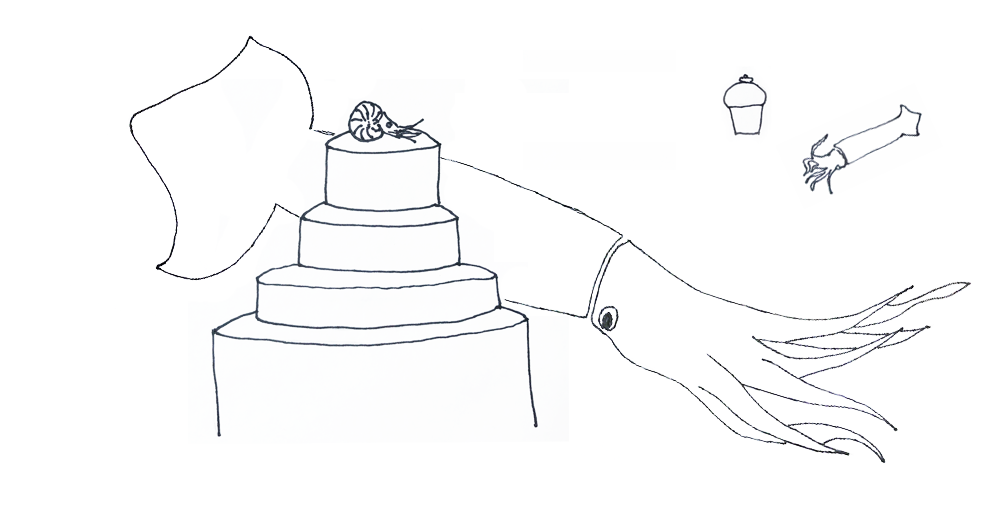 If a sperm whale ate one very young Dosidicus squid whose mantle was only 15 centimeters (5.9 inches) long, it likely only ate about 150 grams (⅓ of a pound) of squid. However, if a sperm whale ate an adult with a mantle that was 80 cm (2.6 feet) long, it would have eaten close to 10 kilograms (22 pounds) of squid!

In order to get a more accurate picture of the amount of squid that a predator has eaten, rather than just the number of squid that it ate, let’s use a little estimation. By comparing previously-collected beak length, mantle length, and body mass measurements of Dosidicus squid, we can use an undigested Dosidicus beak to estimate the mass of the squid that it came from.

After measuring many individuals of 18 different species of squid, a researcher at Texas A&M University was able to find a mathematical relationship between the beak sizes of various squid species and their mantle lengths. In the report that was generated, the paper’s author, Gary A. Wolff, plotted the mantle lengths and the lengths of the lower beaks (called the “lower rostral length”) of many Dosidicus gigas, here’s what it looked like:

So, if the lower rostrum length of a squid beak collected from a whale stomach measured 0.76 centimeters, how long was mantle of the squid that it came from, in millimeters? Try estimating the squid’s size in two ways: by plotting it on the Dosidicus chart above and finding the corresponding mantle length, or by plugging it into the formula for the line of best fit.

Figure out the mass of a squid from its mantle length

Based on the measurements of mantle length and body mass of over 200 squid collected by fishermen in the Pacific ocean, researchers from Universidad de Concepción in Chile found that the body weight (in grams) of Dosidicus squid could be estimated from their mantle lengths (in millimeters) using the following formula:

Using the mantle length you estimated from the beak that measured 0.76 centimeters, estimate the weight of that squid in grams. Don’t forget your order of operations, calculate the exponential expression first!

A 2005 study of the stomach contents of 175 swordfish from the Pacific ocean found that Dosidicus gigas beaks made up over 30% of the swordfish diet by weight. The researchers estimated that the mantle lengths of the Dosidicus consumed were all between 30 cm and 65 cm in length. Based on the mantle lengths provided, what were the smallest and largest Dosidicus beak sizes that these researchers found in the stomachs of swordfish during their study? How can you tell?

Wolff, G. A. (1984). Identification and estimation of size from the beaks of 18 species of cephalopods from the Pacific Ocean.

CCSS.MATH.CONTENT.HSF.IF.C.9
Compare properties of two functions each represented in a different way (algebraically, graphically, numerically in tables, or by verbal descriptions).

CCSS.MATH.CONTENT.HSS.ID.B.5
Summarize categorical data for two categories in two-way frequency tables. Interpret relative frequencies in the context of the data (including joint, marginal, and conditional relative frequencies). Recognize possible associations and trends in the data.