Cephalopods are a diverse and versatile bunch of critters. The many kinds of octopus, squid, nautilus, and cuttlefish that make up the class Cephalopoda are clever predators and scavengers that can live in many different depths and environments in the world’s oceans. All cephalopods are soft-bodied, with arms around a central mouth; highly developed, image-forming eyes; and a tube-shaped organ called a funnel, or siphon, near the head. Cephalopods have evolved a remarkable variety of modes to get from one place to another. Some swim using all their arms or web, some wave small fins along their body, and others can actually walk from place to place!

Check out the Macroscope video “Run, Octopus, Run” to learn how one marine biologist studies a bizarre example of cephalopod locomotion:

Perhaps the most common type of locomotion used by cephalopods is jet propulsion. To travel by jet propulsion, a cephalopod such as a squid or octopus will fill its muscular mantle cavity (which is used to get oxygenated-water to their gills) with water and then quickly expel the water out of the siphon. The force of the water jet coming out of the siphon is opposed in equal magnitude by the force of the cephalopod’s body as it moves in the opposite direction (Newton’s 3rd law). These equal, opposing forces send the cephalopod jetting away from its water stream, much in the same way that a rocket ship is sent in the opposite direction of the exploding rocket fuel coming out of its engines. This type of locomotion is a great way for an octopus to accelerate away from danger quickly or for a squid to jump on to unsuspecting prey.

By pointing the siphon in different directions and by changing the amount of water drawn in and the force applied to push it out, cephalopods can modify the direction and speed of their jet propulsion. Some cephalopods use their arms to help steer, while others have stabilizing fins on their mantle that help them control their jet-propelled movements.

Though all cephalopods have a siphon and mantle cavity, not all of them are built for speed. The size of the mantle cavity, the pressure on surrounding organs, and the energy it takes to fill the mantle cavity with each jet limit the amount of water and speed at which water can be expelled.

Squid are the rock stars of jet propulsion. Their long, slender bodies limit drag under water so they can accelerate quickly towards prey, and their stabilizing fins help them steer and stay on target.

Can you engineer a jet-propelled “cephalopod” that is both fast and stable underwater? In this activity, you’ll use a water balloon to model the jet propulsion of a cephalopod, and then engineer its “mantle” and “siphon” to help it steer straight and travel farther.

Test Out Your Cephalopod Prototype 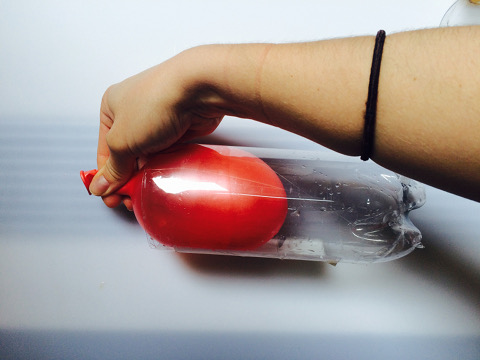 Modify and Improve Your Cephalopod’s Design!

How will you improve the design of your cephalopod so that it travels farther and straighter? Think about what you can add to the outside and how you can change the position and orientation of the siphon and size of the mantle cavity using tape, scissors, and other odds and ends. You can compare your different designs based on the distance they go and how straight they travel, or you can even try to engineer your cephalopod so that it can turn corners!

However you design and improve your cephalopod, we hope you share photos of your finished creature with the hashtag #CephalopodWeek.

The Vampire Squid From Hell

When marine biologist Roger Hanlon captured the first scene in this video he started screaming.