This article is part of the Book Club: ‘A Brief History Of Time’ spotlight

This story is part of our summer Book Club conversation about Stephen Hawking’s 1988 book ‘A Brief History of Time.’ Want to participate? Sign up for our newsletter or call our special voicemail at 567-243-2456.

This summer, as part of the Science Friday Book Club reading of Stephen Hawking’s monumental work, A Brief History of Time, we called upon artists to help us interpret Hawking’s vivid depictions of the universe with art. Working with the online artists’ network Ello, we hosted a portfolio competition for artists who wanted to help us hook the next generation of theoretical physicists, mathematicians, and science communicators.

And wow, did you deliver! 335 artists submitted 442 pieces of art as part of our open opportunity. They ranged from the digital masterworks to engrossing gifs to stunning photographs, all of which can be viewed here.

Of those pieces, six stood out—and we were able to commission them to help us tell the story of spacetime. We’re extremely pleased to present A Brief History of Time… in art.

Quote from A Brief History of Time: “If (the universe) was expanding fairly slowly, the force of gravity would cause it eventually to stop expanding and then to start contracting. However, if it was expanding at more than a certain critical rate, gravity would never be strong enough to stop it, and the universe would continue to expand forever. This is a bit like what happens when one fires a rocket upward from the surface of the earth. If it has a fairly low speed, gravity will eventually stop the rocket and it will start falling back. On the other hand, if the rocket has more than a certain critical speed (about seven miles per second), gravity will not be strong enough to pull it back, so it will keep going away from the earth forever.” 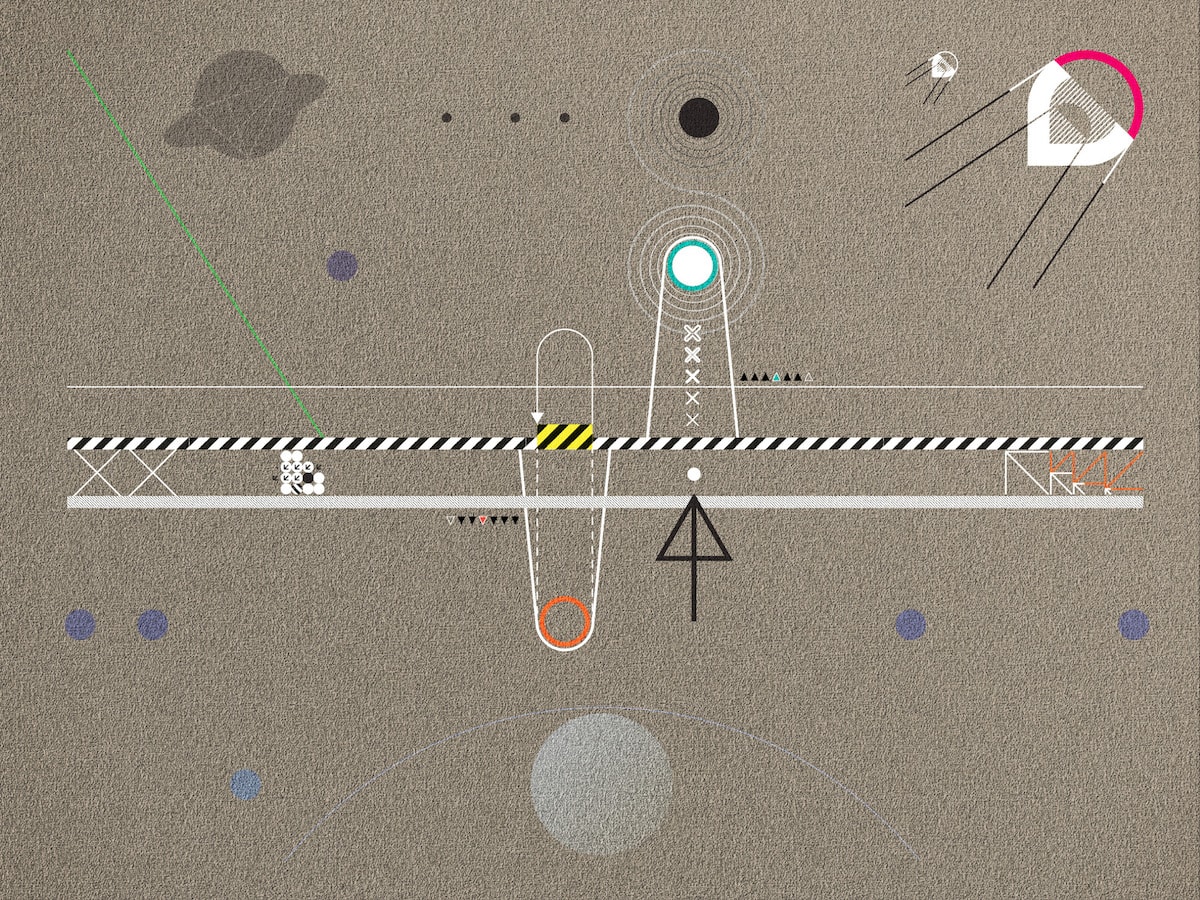 Quote from A Brief History of Time: “…the idea of defining a black hole as the set of events from which it was not possible to escape to a large distance, which is now the generally accepted definition. It means that the boundary of the black hole, the event horizon, is formed by the light rays that just fail to escape from the black hole, hovering forever just on the edge. It is a bit like running away from the police and just managing to keep one step ahead but not being able to get clear away! …I realized that the paths of these light rays could never approach one another. If they did, they must eventually run into one another. It would be like meeting someone else running away from the police in the opposite direction–you would both be caught! (Or, in this case, fall into a black hole.) But if these light rays were swallowed up by the black hole, then they could not have been on the boundary of the black hole. So the paths of the light rays in the event horizon had always to be moving parallel to, or away from, each other.” 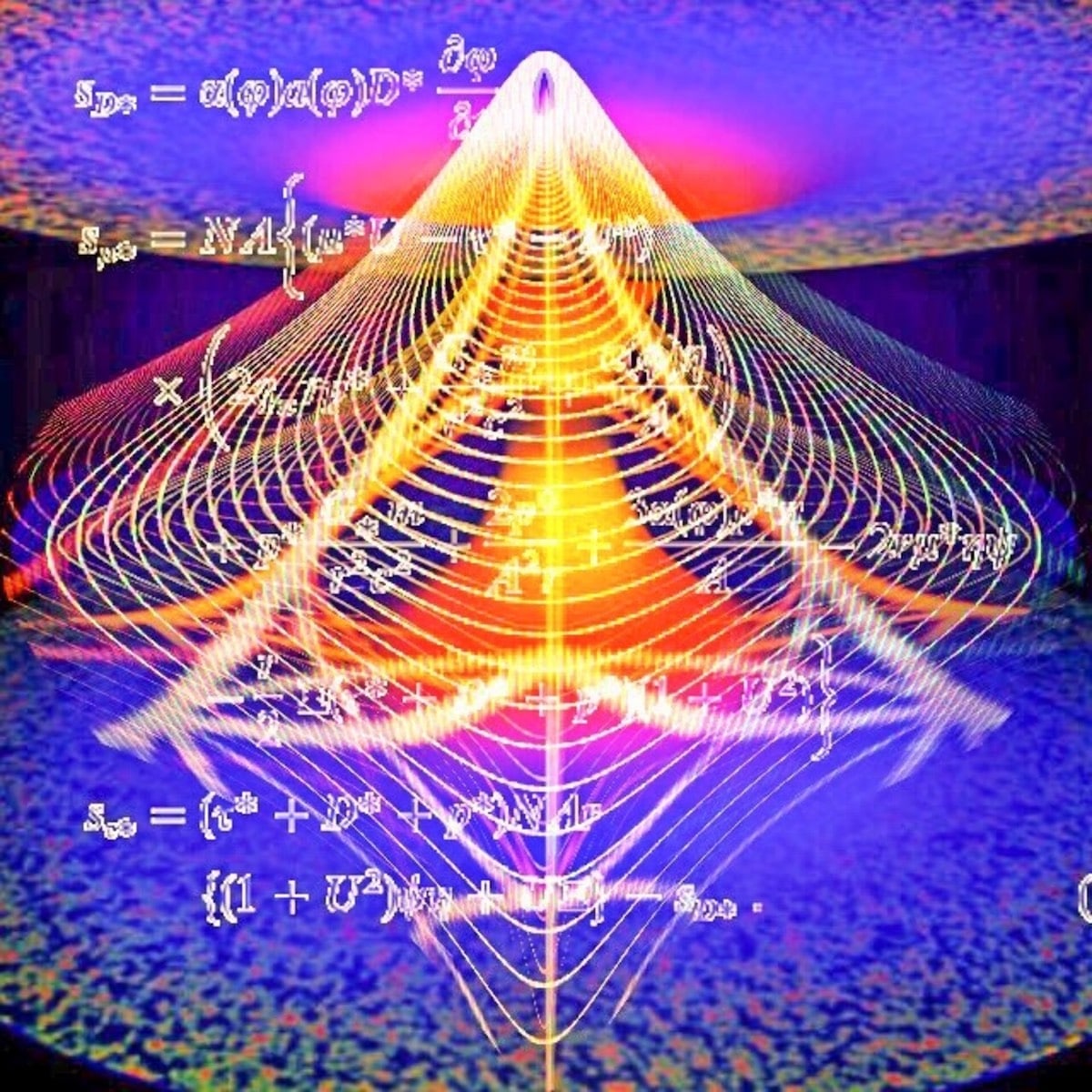 Artist Statement: I picked the quote 103 on black holes because it also references event horizons, both i find extremely fascinating as quantum geometrical structures of space and time, seen as light and matter, breaking down and rearranged Into new emergent entities.

I created this image combining the metrics of Schwarzschild black hole equation of mass. Plus Hawking’s analog model of gravity in relation to black holes, that I wanted to represent in this optical image as cosmological geometry.

A Book Club At The End Of Time

Carolina Rodriguez Fuenmayor
The End Of The Universe
Bogotá, Colombia

Quote from A Brief History of Time: “…all we can really be sure of is that even if the universe is going to recollapse, it won’t do so for at least another ten thousand million years, since it has already been expanding for at least that long. This should not unduly worry us: by that time, unless we have colonized beyond the solar system, mankind will long since have died out, extinguished along with our sun!”

Quote from A Brief History of Time: “Pauli’s exclusion principle says that two similar particles cannot exist in the same state; that is, they cannot have both the same position and the same velocity, within the limits given by the uncertainty principle…If the world had been created without the exclusion principle, quarks would not form separate, well-defined protons and neutrons. Nor would these, together with electrons, form separate, well-defined atoms. They would all collapse to form a roughly uniform, dense ‘soup.'” 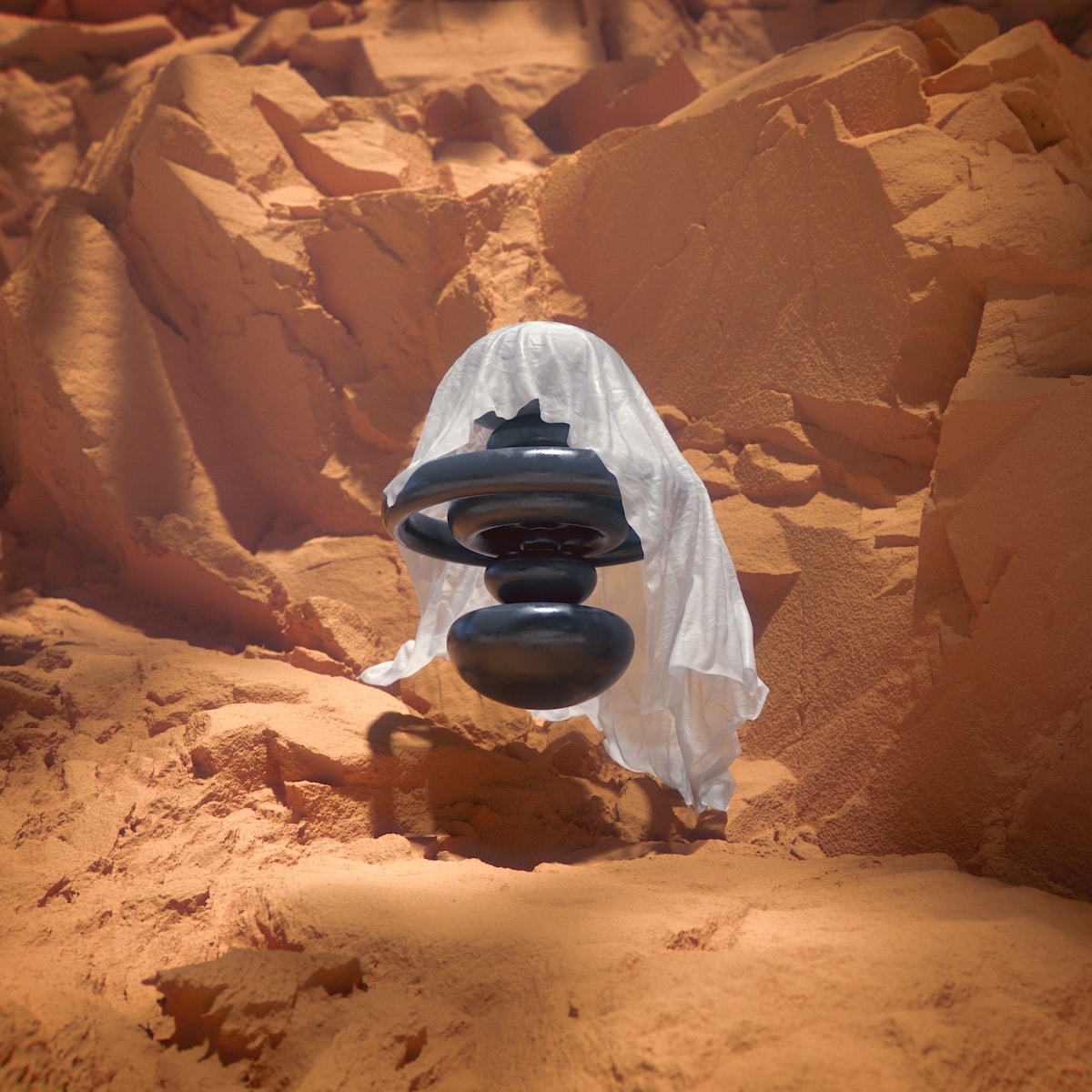 Artist Statement: Hi, my name is Vladimir Jankijevic, I’m an artist and software engineer based in New York. I chose this quote because I enjoy thinking about quantum phenomena. I immediately felt challenged but at the same time very intrigued by it. With this work I tried to represent the effect this discovery had on our understanding of the atomic structure. Pauli’s exclusion principle provides us with a glimpse into the alien nature of our reality. 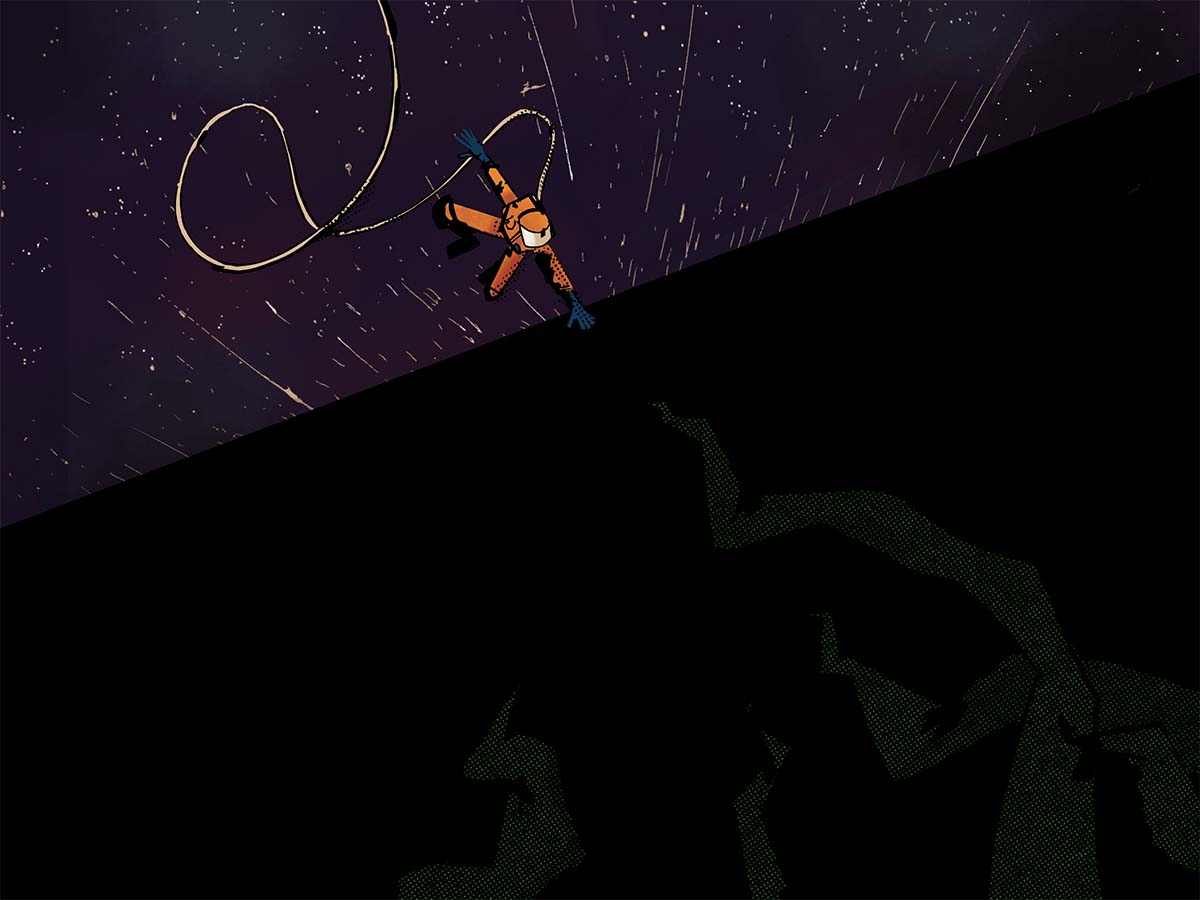 Artist Statement: My name is Mal Jones and I’m an illustrator and designer based in Alexandria, Virginia, just outside of Washington, D.C. I chose this quote because it really showcases Hawking’s ability to take physics concepts, and apply a metaphysical, dramatic, amazing, and a little scary take to them. My illustration takes Hawking’s dramatic tone and filters it through 1950s science fiction. I’m playing with color, shape, and contrast to mirror Dante’s use of language to create metaphor. Plus, who really knows what’s lurking in the infinite blackness beyond an event horizon?

Quote from A Brief History of Time: “In order to understand what you would see if you were watching a star collapse to form a black hole, one has to remember that in the theory of relativity there is no absolute time. Each observer has his own measure of time. The time for someone on a star will be different from that for someone at a distance, because of the gravitational field of the star. Suppose an intrepid astronaut on the surface of the collapsing star, collapsing inward with it, sent a signal every second, according to his watch, to his spaceship orbiting about the star. At some time on his watch, say 11:00, the star would shrink below the critical radius at which the gravitational field becomes so strong that nothing can escape, and his signals would no longer reach the spaceship. As 11:00 approached, his companions watching from the spaceship would find the intervals between successive signals from the astronaut getting longer and longer, but this effect would be very small before 10:59:59. They would have to wait only very slightly more than a second between the astronaut’s 10:59:58 signal and the one that he sent when his watch read 10:59:59, but they would have to wait forever for the 11:00 signal. The light waves emitted from the surface of the star between 10:59:59 and 11:00, by the astronaut’s watch, would be spread out over an infinite period of time, as seen from the spaceship. The time interval between the arrival of successive waves at the spaceship would get longer and longer, so the light from the star would appear redder and redder and fainter and fainter. Eventually, the star would be so dim that it could no longer be seen from the spaceship: all that would be left would be a black hole in space.” 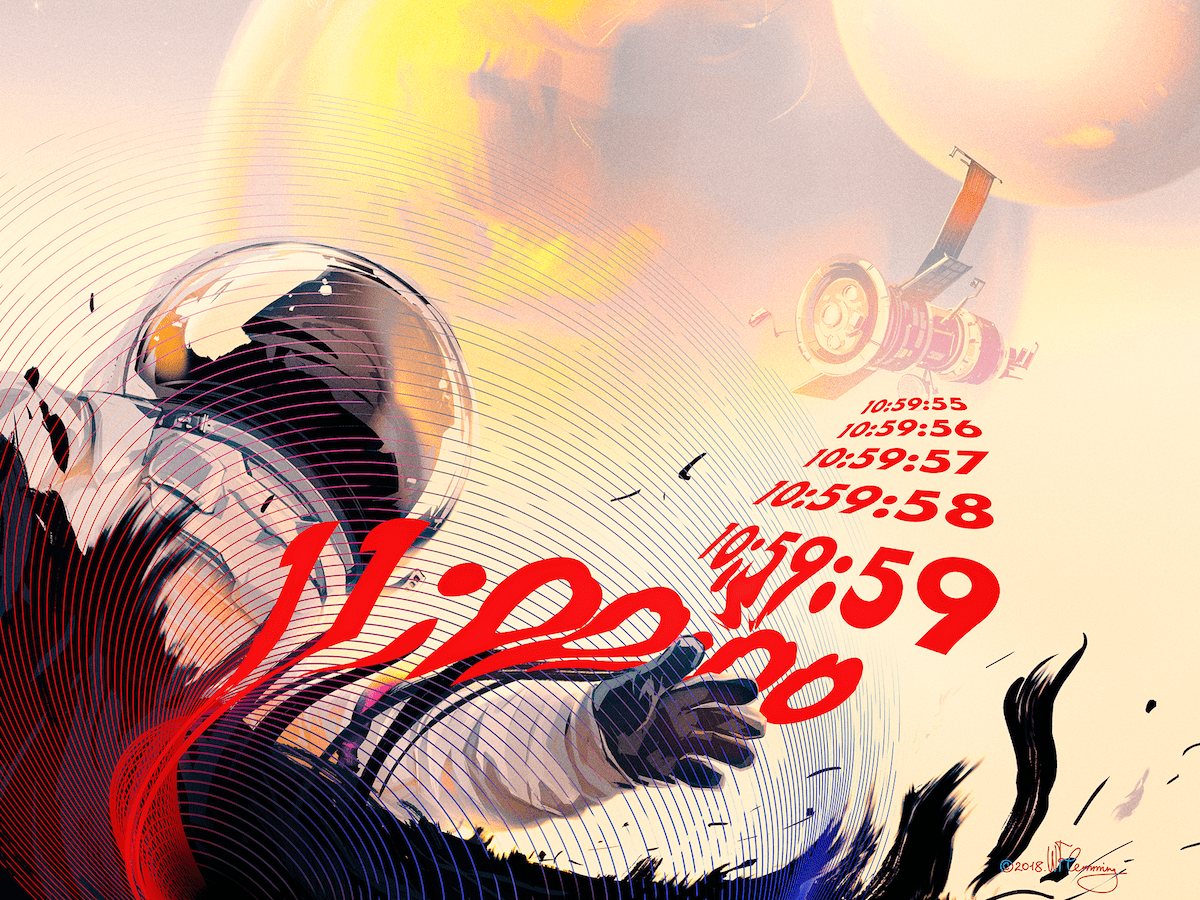 Artist Statement: Hi, my name is Tanya a.k.a. W. Flemming, I am an artist and illustrator living in Manchester, U.K.

I read Stephen Hawking’s book several years ago and, as a long time follower of his scientific discoveries, have always been picturing them in my head—so to actually illustrate my version of one of the quotes from the book and share it with the world seemed like a perfect artistic challenge to me.

I have chosen the quote, which describes what will happen to the observer of a star on the brink of collapsing into a black hole, because it is, perhaps, the most accurate example of real events, which can happen—but if they did—we would only have one version of these events available and recorded in history. It would be the observations recorded by the spaceship—the astronaut’s vision and feelings, no matter how astonishing and valuable, would be lost to humanity—that would confirm the theory of the nature of black holes and their behaviour. I wanted to represent that Astronaut’s lost version. I could call it “The lost files of Astronaut A” or “How it feels to experience the relativity of time beside a black hole.”

Stephen Hawking says that, were he to start from scratch, he wouldn't focus on physics.

In "Thunder and Lightning," author and artist Lauren Redniss illuminates how weather works, and the sometimes strange ways it shapes our lives.