Editor’s Note, March 13, 2019: Since reporting and publishing this article, new research has come to light that suggests that the Japanese phone carrier SoftBank, not DoCoMo, created the first set of distinct emoji characters. Read more about the findings on Emojipedia.

Many assume the word emoji has roots in emotion, but the resemblance is purely coincidental. It actually comes from the Japanese for picture (絵, pronounced eh), plus letter, or character (文字, mōji). Essentially, the word describes a pictograph. While the word itself may have no etymological link to the word emotion ?, the way we use emoji tells us a lot about who we are, and how we connect with each other ?.

In the 1990s, the Japanese mobile phone operator DoCoMo struck gold. The company tacked a heart pictograph option onto a cheap pager, which was a massive success with teenagers. But when the company released a new version of the pager geared toward businesspeople—and without the heart button—it incited an “outcry.” Many users even left DoCoMo and signed up for another pager company that had adopted the heart.

“That’s when I knew that symbols absolutely had to be part of any texting service,” Shigetaka Kurita told The Guardian. “That was my main inspiration.”

Kurita led the team at DoCoMo that designed a set of 176 pixelated characters inspired by basic concepts of things like weather, food, and feelings. They were called emoji—a word that originally meant “pictograph” or “icon” in general, for a button like “save” or “quit.” The first set of emoji launched on DoCoMo phones in 1999.

Other Japanese carriers quickly followed Docomo’s lead and developed their own versions of the pictographs, and since then, emoji have exploded ??. In 2007, the Unicode Consortium, a Silicon Valley nonprofit that standardizes software and code across platforms, began to standardized emoji as well so they would appear more or less the same across the internet, regardless of what type of phone, mobile network, computer, or website emoji were accessed from. Emoji became a staple in the U.S. when an emoji keyboard was added to Apple iPhones by 2011.

As of June 2018, we can choose from over 3,000 emoji. On Facebook Messenger, people send and receive 5 billion emoji every single day. Today, the concept of emoji has been ingrained into culture, and is now part of our everyday vocabulary. The ? emoji was even Oxford Dictionary’s Word of the Year in 2015.

Sure, plenty of those emoji zipping across the world every day are likely along the lines of ❤️ and ?. But emoji can be used for public health purposes, too. In 2015, Johns Hopkins Center for Communication Programs and the Bill & Melinda Gates Foundation proposed a mosquito emoji to raise awareness about global mosquito-borne illnesses, and make it easier to communicate across cultures and languages about the public health risks of the insect. The mosquito emoji was approved in February 2018, and hit most emoji keyboards in June. But the science of emoji doesn’t stop there. 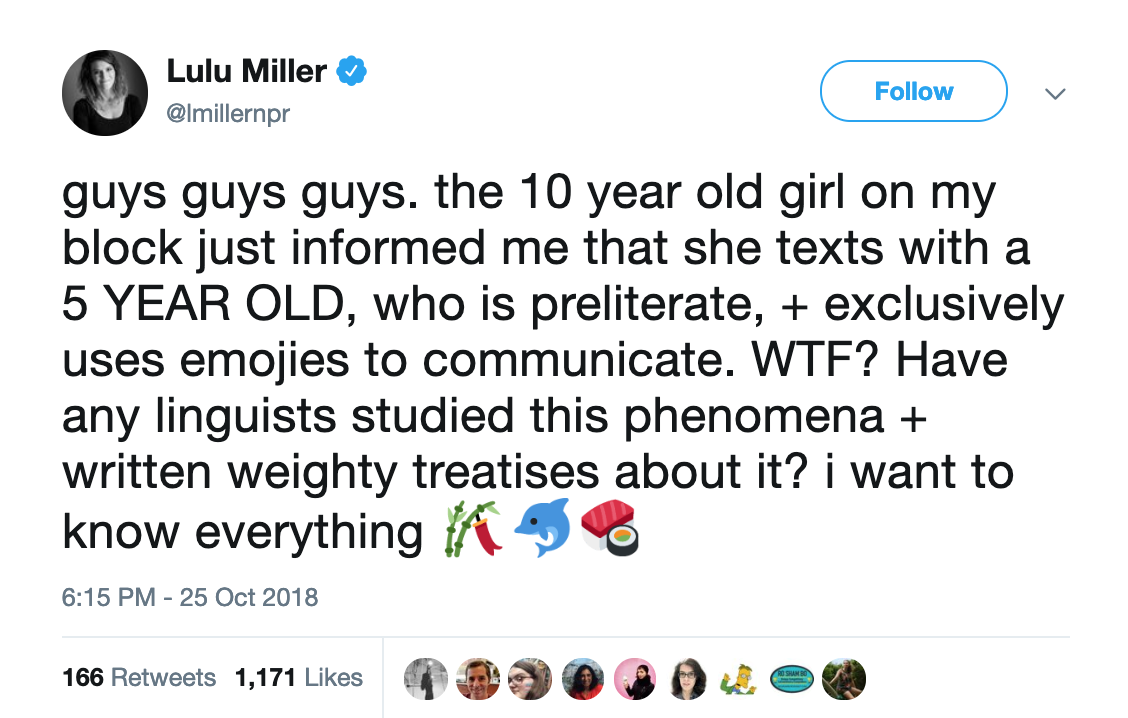 Curious, McCulloch created a survey about not just whether preliterate kids use emoji to communicate, but how—and what it tell us about early digital literacy and communication skills. And the results are fascinating ?.

Hand symbols like ?, ?, and ? are some of the most popular emoji across the board for adults, but the preliterate kids from the survey rarely use them, writes McCulloch for Wired. Kids prefer face emoji. But unlike adults, kids don’t tend toward the ones that convey a degree of irony, like ? or ?, but are more likely to use faces like ? or ?. In addition, adults tend to group emoji in sets of 2-5, while kids will dip into the keyboard as if it were a sticker set, and will often send them in large groups. For example, check out this exchange between a kid and an adult:

Look like nonsense to you? “Sending long strings of emoji could be like digital babbling: the nonsense strings that get us used to how our bodies work and how to take turns in a conversation,” McCulloch writes.

McCulloch says that, presumably, the child was borrowing an adult’s phone to send the emoji, and the written responses were read aloud to the kid. These kinds of exchanges are something we haven’t really encountered before.

“When you think of the kinds of texts that parents traditionally read out loud to their kids, they’re things like storybooks, which are great,” says McCulloch in a follow up call to Science Friday. “But they’re not written specifically for the kid from a specific person. Whereas if you’re reading a kid what their parent or their beloved adult in their life has written for them, that’s a really powerful experience…. Even if they can’t participate in the full sense of sending words, they can send back the emoji and they can see that their message has been received, because the adult will often comment (using words), on the emoji that the kid sent… the kid’s understanding the message that’s being [read to them], and they’re having this dialogue.”

Despite doom and gloom you might hear, emoji aren’t the equivalent of language and aren’t ruining language as we know it, McCulloch says, “but language isn’t the only way that you communicate.” One element of speech that can’t cross into the written word? Gestures—and it’s possible we’re using emoji to fill the gap.

“If you look at the actual data of what people write, it’s not so much using emoji as substitutes for specific words,” says McCulloch. “You don’t see people putting the cat emoji for the word cat very often—in many cases, what they’re doing is adding an in extra emoji to add on an additional layer of meaning on top of the words they’re saying.”

“If I say something like ‘good job’ with a thumbs up, that’s going to be different from ‘good job’ with an eye roll,” she says. “I could do the same thing with the ? or ? emoji to convey that same level of sarcasm or emotional sincerity.”

McCulloch says she can’t have a normal conversation anymore because she’s constantly analyzing people’s gestures. And it got her thinking: “How can that help us understand the actual role of emoji in conversation and kind of dispel some of the moral panic around ‘oh no, they’re ruining [language]’? But we have gesture, and they’re not in competition with each other; they compliment each other.”

Johanna Mayer is a podcast producer and hosted Science Diction from Science Friday. When she’s not working, she’s probably baking a fruit pie. Cherry’s her specialty, but she whips up a mean rhubarb streusel as well.

The Origin Of The Word ‘Meme’

What does LOLcats have to do with evolutionary biology?

That Emoji You’re Sending Is Open to Interpretation

Emoji, the tiny graphics used in text communications, can be interpreted in a variety of ways.