This educational resource is part of the Incredible Eggs spotlight

There are so many lovely harbingers of spring: buds on trees, robins pecking for worms, and Easter egg hunts. Everyone loves the thrill of spotting a brilliantly colored Easter egg hidden in the grass. But, before hiding, that egg needed a dye job. That’s where we turn to chemistry.

It starts with how we color foods. Synthetic dyes, like food coloring, use organic molecules. When white light hits a molecule’s electrons, some wavelengths of light (colors) are absorbed, while others are reflected. Whatever color of light gets reflected is what we see. Subtle differences in molecular structure will drastically change a dye’s color. Check out the diagram below to see how this light absorption and reflection works. 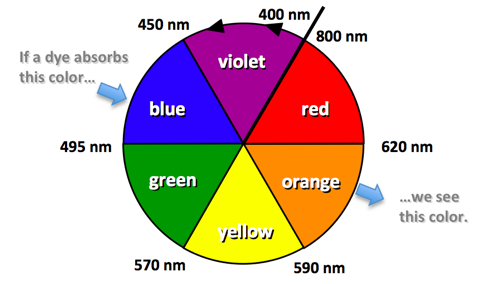 When we apply a chemical dye to the surface of an object, we modify and rearrange the molecules on that surface. Doing this changes the wavelengths of light that the object typically absorbs and ultimately changes the color that the object appears to be. For example, a simple substitution of a hydrogen atom (H) with a hydroxyl group (OH) will change a blue-reflecting molecule into a green one.

Why Add Vinegar to Egg Dye?

Most instructions for dyeing an egg say to add vinegar to the dye mixture, but why? When an egg is soaked in an acidic mixture, two things happen. First, the eggshell reacts with the acid and produces carbon dioxide gas. (That’s why bubbles form on the surface of the eggshell while it soaks.) The shell then starts to dissolve, which increases the surface area of the egg and exposes more of the egg to the dye.

Second, proteins in the thin layer of the eggshell’s cuticle react with the acid. The proteins become protonated (i.e., they acquire extra hydrogen ions), which means that more positive charges collect on the shell’s surface. Those positive charges easily bind to the dye molecules, which are negatively charged (opposites attract!), and the dye sticks to the egg surface.

Will Other Acids Work?

In general, acids are chemical compounds characterized by their ability to produce a surplus of positively charged hydrogen ions. Ordinary white vinegar is a dilute solution of acetic acid, and is only one example of a common household acid. You also find acids in fruit juice, soda, and some pain relievers. A dye mixture can be made more acidic by using a greater amount of acid or by using a stronger acid.

Quantitatively, acids are stronger if they have a larger acidity constant, or Kavalue. This means they give up their hydrogen(s) more readily in solution. In the following experiment, you will use various household acids like the ones below to determine how acid strength affects the color of dyed eggs. What happens if eggs are dyed using coloring agents and various household acids like fruit juice, soda water, aspirin, and vitamin C tablets? Does the acidity of a dye mixture affect the intensity of the color? Can we impart any color we want, simply by mixing the right combination of dye and acid?

Because different household items have a range of acidity, you probably noticed that some acidic solutions produced a more intense color than others. Which acids gave the dyed eggs the boldest and most concentrated color? Are the results what you expected?

You already know that the more acidic dye mixtures make more intense colors. In chemistry, reactions are affected by the concentration of the reactants involved. Now, play around with the experiment. What changes could be made to the dye mixture that would alter the outcome? How would adding common household bases, such as baking soda or ammonia, change the color? What would result from using different temperatures or times for the reaction?

Eggs can be dyed with natural dyes from color-rich foods instead of synthetic dyes from food coloring. Boiling pieces of red cabbage, beets, or turmeric powder in hot water and decanting the liquid gives a homemade version of food coloring that can also be used for egg dyeing.

The views expressed are those of the author and are not necessarily those of Science Friday.

Photographs are courtesy of Steven O’Malley and Jeff Potter.

Steven O’Malley is a chemistry teacher at Stuyvesant High School in New York City and a Master Teacher Fellow at Math for America. He earned his PhD in organic chemistry from Columbia University. He enjoys running, learning new languages, and helping students learn about science.

Chef Wylie Dufresne, the owner of New York City restaurant wd~50, experiments with food, literally. He has lab notebooks detailing what certain chemicals do to certain dishes. One...

Use household materials to investigate and explore your ability to smell an odor, then compare and contrast results to determine if some individuals have a better sense of...