This segment is part of the Book Club: ‘Frankenstein’ spotlight

A brilliant young scientist, Victor Frankenstein, creates life out of a jumble of body parts—only to turn his back on his bewildered creation and leave it to fend for itself. Are the murders that ensue Dr. Frankenstein’s fault? Both Frankenstein and his monster tell their stories in the pages of Mary Shelley’s Frankenstein—the #SciFriBookClub’s winter book pick. Join Ira and the SciFri team as we read Mary Shelley’s spooky science fiction tale this month, and ask what it means to be human.

[The future of human gene editing is promising—but still uncertain.]

First published in 1818, Shelley’s book drew inspiration from the electricity experiments of Luigi Galvani and Alessandro Volta in the late 1700s. Now, in the story of a creator abandoning its creation, which then wreaks havoc upon the world, many see ethical equivalents in conversations around CRISPR, self-driving cars, and even big data. We’ll read and discuss questions like this all month long. And we want to hear from you! (Your comments may be played on the air.) 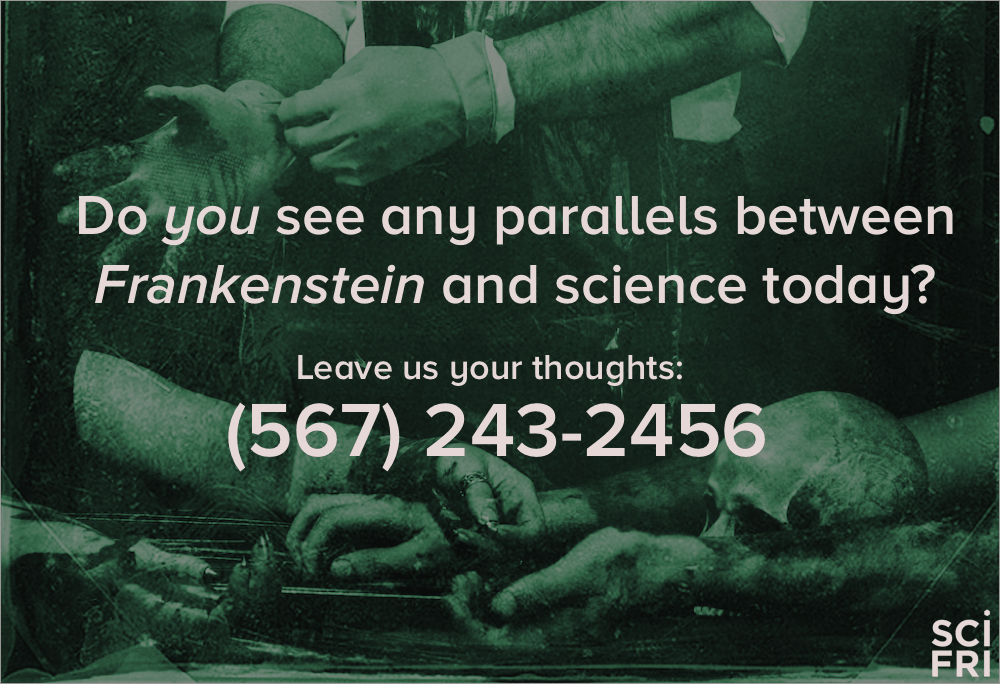 Want to get in on the SciFri Book Club conversation? Here’s how to participate:

Questions about the Club? Post ‘em in the comments below or email bookclub@sciencefriday.com. Happy reading!

IRA FLATOW: OK, so you’ve been spending your winter curled up with various good books. You might want to consider adding another to your shelf, because the sci-fi book club is getting back together, and we’ve got a monster– get it? You’ll see where I’m going. A tale for you here, featuring the original mad scientist Dr. Victor Frankenstein.

That’s right. We’re reading Mary Shelley’s classic science fiction novel about a man who creates a monster. And nothing personal, we want you to join us. Sci-fi radio producer and book club captain, Christie Taylor, is with me to tell you more about this month’s book club and how you can join in. Hey there, Christie.

IRA FLATOW: Let’s talk about this.

CHRISTIE TAYLOR: So Frankenstein– you might be wondering why we picked this. Well, the timing is actually very good. It is a nice, round anniversary for the publication of Mary Shelley’s novel Frankenstein. She wrote it in 1816 when she was 18 years old, one rainy summer at Lake Geneva. And it was published on January 1st of 1818, so 200 years old and still looking great.

IRA FLATOW: So, OK. So it’s the 200th anniversary. There’s got to be a science reason why we’re reading this one.

CHRISTIE TAYLOR: Sure! Well, as you might remember from the story, it involves reanimating a corpse with– at least as we’re seeing in the movies– lightning. This is about the time that Luigi Galvani and Alessandro Volta were fighting about why, if you ran electricity through a frog leg, it twitched. A dead frog leg. They had a big fight about this in the late 1700s. Long story short, we got to reanimating a monster with some lightning bolts.

It’s also actually really timely in a lot of other ways, because it brings us to these really interesting conversations about the ethics of creating life, if you’re not going to actually maybe make sure it’s successful or even well-balanced. In the book at least, we see that the monster– as we hear it referred to– maybe could have been a better guy, if he’d had a little bit more nurturing. And this has some ties to maybe CRISPR, AI, even big data if you ask some of the people that think about this kind of stuff.

IRA FLATOW: Well, you mentioned the monster, and we were talking about this earlier. If you just think that the book is like the films, the monster is not at all like the film, right? Like we’ve seen in both films. Gene Wilder in the original, Boris Karloff–

CHRISTIE TAYLOR: Right, and that famous, it’s alive, it’s alive. Which we don’t actually see in the book.

IRA FLATOW: It’s not in the book.

CHRISTIE TAYLOR: He doesn’t say anything. Well, if he said anything, we don’t know. He’s just very excitedly writing about it. But yeah, the monster is still very big, still very ugly. That’s sort of its biggest crime is being ugly. But there’s no bolts in the neck, no scar on the forehead as far as we know. And he has pretty good hair, apparently lustrous black hair that just makes his sallow face look a little bit more disturbing.

And he’s also very articulate. We actually hear a lot from him in the book. He tells us his life story, which is pretty interesting because he goes off exploring. And there’s this really beautiful scene, actually, right in the very beginning, where we have this image. A ship captain is talking about being stuck in the Arctic among the icebergs. And he looks out one night, and he sees this giant, hulking figure on a dog sled going through the night across the ice. And that’s not something you get to see in the movies.

IRA FLATOW: No, because there’s the lightning storm in the movie. So that would be summer time. OK, so we’re sold on doing the book. How do we get copies of the book?

CHRISTIE TAYLOR: Well, the first thing you need to remember in all of this is our web site sciencefriday.com/bookclub. That’s going to be your one stop shop for pretty much everything related to playing along. And for starters, we are giving away 20 free copies that will be shipped to you for free on our website. This is a copy that was put out by MIT Press in collaboration with Arizona State University last year. It is annotated, with all sorts of helpful information from modern scientists and thinkers to people who have studied Mary Shelley herself. So you get a lot of the historical context, as well as some questions to think about moving forward.

And that is on our web site sciencefriday.com/bookclub. That form to enter will close at 10:00 PM Sunday night so we can catch our weekend listeners. But the good news is, if you don’t get one of those copies, this is a story that is in the public domain. It’s available for free online in a lot of different places. That annotated version is also for free online at frankenbook.org if that piques your interest.

And then, we have an excerpt to get you started– if you’re still on the fence– at our web site sciencefriday.com/bookclub.

IRA FLATOW: Of course, this is science. This is Science Friday from PRI, Public Radio International. Talking with Christie Taylor, associate producer and also honcho of this book club for Frankenstein. OK, so once we’re reading, how do we play along at home, Christie?

CHRISTIE TAYLOR: Well Ira, there are a few options. We’re launching a weekly newsletter, first of all– this is all new for this book club– where you will get some discussion questions if you want to feel like you’re in high school English again. Discussion questions, some articles. There are a lot of people writing and thinking about Frankenstein this year because of this handy anniversary, so we’re going to try to hook you up with all of that great conversation that’s happening on the web and in the world.

And then, we also– if you’re on Twitter– have a hashtag, #scifibookclub, so you can play along all week long for the next five weeks. And then, you can even call our off air voicemail. So this is not the same as our call in number. It is (567) 243-2456. Again, (567) 243-2456 if you want to leave a comment, a thought, a reflection. And we’re going to play some of those on the air each week leading up to a final wrap up conversation with two readers who have been reading and thinking about this book for a while, Elizabeth Bayer, speculative and science fiction author, and Josephine Johnston, a bio-ethicist with the Hastings Center.

IRA FLATOW: And what date are we going to do that?

CHRISTIE TAYLOR: Oh, that is on February 9th, Ira.

IRA FLATOW: Both of these readers have spent a ton of time thinking about the story. And we’re going to have you read it and let you give us comments. If you want a comment that will play on the air, the number again that Christie gave out is (567) 243-2456. We don’t want a tome that you send. I mean, in both senses of the word, Frankenstein. We want it just to be a little short question or a comment.

Now, you know I’m a big fan of the movie and Gene Wilder’s funny take on it. You already mentioned a lot of the things that are in the movies, and both movies are not in the book. And one key thing to remember that everybody confuses is, the monster is not Frankenstein, right?

CHRISTIE TAYLOR: Correct. This is a thing that, I think, people can get maybe a little too pedantic about. But yeah. Victor Frankenstein is your scientist. And he actually doesn’t have a name in the book. Victor Frankenstein called the monster a lot of different, kind of mean names, the creature, the demon. I think he calls him the abortion at one point.

But I think, also, it’s worth reflecting on whether maybe– you know, as we read the book– perhaps Victor Frankenstein himself has some qualities that might not be considered monstrous along the way. So maybe, the monster is Frankenstein.

CHRISTIE TAYLOR: Yeah, I’m actually only about halfway through, because I’m savoring every page. And I have a million dog ears and quotes underlined, but I am really excited to get to the end and figure out what happens in this sort of epic duel between the creator and his creation.

IRA FLATOW: And people consider this to be maybe the very first science fiction.

CHRISTIE TAYLOR: At the very least, it was the first of modern science fiction. I know Brian Aldiss is someone who’s written a lot about this. He was definitely the first mad scientist in the sub-genre. And I think, actually, that’s a really great question to consider too, as you read. Is he a good scientist? Is he representative of scientists? Could scientists learn anything from him?

IRA FLATOW: And as you say, it is very relevant today, as we talk about the new kinds of stuff being made in laboratories.

CHRISTIE TAYLOR: Yeah, CRISPR, AI again, self-driving cars is out of Frankenstein’s story here. Are we going to regret this creation, or do we need to take better care of it as we go?

IRA FLATOW: To be continued. And that’s a wrap! Thanks so much for coming on. Christie Taylor, associate producer at Science Friday and chief bookworm for the sci-fi book club. Thanks, again.

And again, you can learn more about the book club. Enter to win that free copy of Frankenstein and sign up for the weekly book club newsletter, sciencefriday.com/bookclub.

Copyright © 2017 Science Friday Initiative. All rights reserved. Science Friday transcripts are produced on a tight deadline by 3Play Media. Fidelity to the original aired/published audio or video file might vary, and text might be updated or amended in the future. For the authoritative record of Science Friday’s programming, please visit the original aired/published recording. For terms of use and more information, visit our policies pages at http://www.sciencefriday.com/about/policies/

Is Silicon Valley Making Its Own Monsters?

The unintended consequences of the tech world, and what CEOs could learn from Mary Shelley.

Tackle the centuries-old novel with some modern approaches for kids of all ages.