This educational resource is part of the Breakthrough spotlight

What do you notice about the leaves of the wheat on the right? How about on the left?

See those yellow and red spots on the leaves on the left? Those wheat plants are sick. They have a disease called wheat leaf rust. Wheat leaf rust is caused by a fungus, and like many fungi, it spreads from place to place in tiny particles called spores. When wheat rust spores land on the leaves of a healthy wheat plant, that plant can become infected. According to the Cereal Disease Lab, wheat rust absorbs nutrients from the plant tissues and makes that plant more susceptible to infection by other fungi and bacteria.

Wheat leaf rust (Puccinia graminis), can become a serious problem for a farmer if left untreated, but it isn’t the only plant pathogen that can cause crop damage. There are thousands of species of fungus or fungus-like organisms that cause diseases in plants and animals. Most pathogens in this group are specialists, meaning they infect only one or a few different species, but fungi are the leading cause of crop loss worldwide, and the problem may become worse with longer periods of warmth and moisture due to climate change. Chemicals called fungicides can be used to kill disease-causing fungi, but they can be expensive and sometimes dangerous to people.

Part of tackling the problem of plant disease is to figure out how these infections move from plant to plant. In the following activity, you will model disease transmission between plants by rain, then devise a way to reduce the spread of a pathogen like the one that causes wheat leaf rust.

How Do Diseases Move From Plant To Plant?

Many human diseases are transmitted through violent expiration events, like coughs or sneezes. These clouds of droplets can carry pathogens and even suspend them in air. But plants don’t sneeze, so how are diseases spread from plant to plant in a field or greenhouse?

To answer this question, let’s start by thinking about the abiotic (nonliving) and biotic (living) factors present in the ecosystem that the plant belongs to, even if that ecosystem exists inside a greenhouse or on a farm. What could move a fungal spore from one plant to another? How could abiotic factors influence the transmission of a (biotic) fungal pathogen like wheat rust? 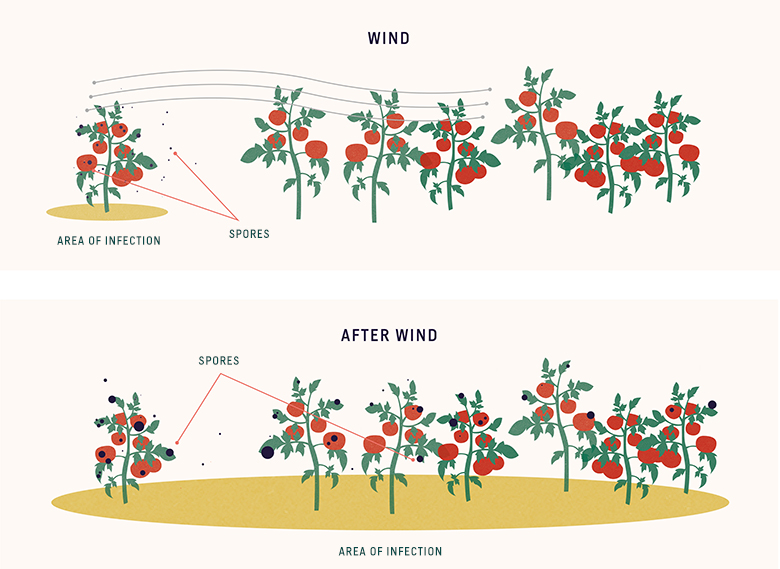 Diseases that attack the leaves of a plant are primarily spread by wind, but they can also move to nearby plants by taking a ride on splashing water droplets from rain or irrigation. How can we change how crops are planted and grown to minimize the spread of pathogens by water droplets? 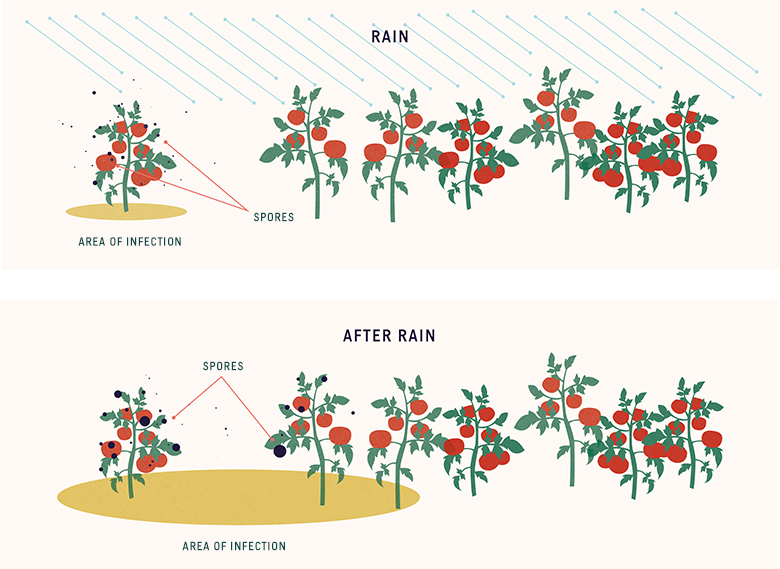 This is one of the questions that Lydia Bouriba, a scientist studying fluid dynamics at the Massachusetts Institute of Technology, attempts to answer with her research. Her lab studies how small droplets can transmit plant and human diseases.

How far can fungal spores travel in water droplets that splash off an infected plant? In the following investigation, you will drop water onto the leaf of a plant and analyze the size and distribution of the droplets that splash off the leaf.  Based on your data, you will make a recommendation to a farmer preparing to plant tomatoes in a greenhouse.

Note: For the purposes of this investigation, we are only addressing disease that can be transmitted by droplets.

Before starting your splatter investigation, examine the leaves of your plant and make a list of observations. Observe things like how much each leaf bends, the size and texture of the leaves, and any other physical traits. Which of those traits that you observed might affect how far a droplet will bounce off the surface?

Materials (Per Group Of 2-4 Students).

While Paper Is Drying, Discuss Your Observations.

Based on the information from your plant splatter experiment, make a recommendation for changes to plant spacing or the irrigation system in a greenhouse growing that plant. In your recommendation, please be sure to refer to your splatter test data and explain your rationale for your recommended changes based on that data. Take the following into consideration:

Raindrops splash down on leaves, spread pathogens among plants.
Bouriba describes the work of a team of researchers from MIT as well as the University of Liege, in Belgium, that uses high-speed images of raindrops splashing down on leaves to show that raindrops can act as a dispersing agent of contaminated droplets from one plant to another.

If you have questions about this resource or would like to share your experience using it with students, please e-mail us at educate@sciencefriday.com or tweet to @scifri

Beth Topinka is the S.T.E.A.M. lab teacher for grades 2-5 at Millstone Township School District in central New Jersey. She’s a vocal advocate for interdisciplinary, problem-based learning, and was recently selected as a state finalist for the 2016 Presidential Awards for Excellence in Mathematics and Science Teaching.

Do Edible Dormice Hold Secrets To The Fountain Of Youth?

Investigate the relationship between the protective ends of DNA, called telomeres, and lifespan in a long-lived rodent.

How Do Fossils Form? Fossilize Me! Card Game

Explore the diversity of fossil types and test your knowledge with the Fossilize Me! Card Game. Can you successfully put together an organism, type of preservation, and fossil...