This article is part of the Book Club: The Great Lakes spotlight

This excerpt is part of our winter Book Club conversation about Dan Egan’s book ‘The Death and Life of the Great Lakes.’ Want to participate? Sign up for our newsletter or talk to us using the SciFri VoxPop app.

The following is an excerpt from The Death and Life of the Great Lakes, by Dan Egan.

It was still July when I drove from Bridgeman’s lab over to Maumee Bay State Park next door and briefly thought of taking a dip to cool off. Until I looked at the sign on the beach that read:

Be Alert! Avoid water that:

As if the prospect of taking a swim in water choking with globs, scums, films and streaks was not enough to scare away a potential swimmer, an accompanying diamond-shaped orange sign was the deal killer:

HIGH LEVELS OF ALGAE TOXINS HAVE BEEN DETECTED. SWIMMING AND WADING ARE NOT RECOMMENDED FOR THE VERY OLD, THE VERY YOUNG OR THOSE WITH COMPROMISED IMMUNE SYSTEMS.

The Death and Life of the Great Lakes

I opted not to risk a swim, as had, evidently, all of Toledo. The beach was deserted except for windsurf shop owner Mark Musgrave and a couple of his buddies. The water off shore was more brown than green and, despite the orange warning sign, he considered conditions to be, all in all, pretty good. Musgrave said some days the lake coughs up rotting algal mats of the spinach-like Lyngbya that are so thick he has to tear through them with his hands until he gets to open water. Other days, soupy blooms of microcystis give the waves green caps. “Not white caps. Green caps!” Musgrave said laughing. “It’s crazy.”

Those days don’t stop him either. “You just live with it,” he said with a smile, even if it makes some people—“the weaker ones,” he joked—sick. He shook his head when I asked him if he had ever gotten ill after swimming. Then he remembered. In 2011, which happened to be the year of the record microcystis slick, he did have to take some medication.

“I had some kind of liver infection,” he said, “and had to go on antibiotics.”

Musgrave knows how to remedy the lake’s ills, but he doesn’t expect it to happen anytime soon.

“It’s the farm system. You’d have to get farmers to do things differently,” he said. “They’ll have to get the government to step in for that.”

Biologist Bridgeman echoed that point; he doesn’t fault the corn, alfalfa and soybean growers whose phosphorus is conspiring with the invasive mussels to spawn the algae troubles. “They’re living with the system that we’ve set up,” he said.

The problem is they’re making their living on the edge of a uniquely shallow water body (the western basin’s average depth is less than 25 feet) that was once protected by the Great Black Swamp’s nature-made water purification system. Bridgeman told me that local lore has it the Maumee River once ran so clear you could watch sturgeon spawning on its rocky bottom. Now it runs brown as mud—and so thick with phosphorus that it is no longer just the lake’s biggest tributary but also the biggest factor in the complex algae outbreak equation. “The elephant in the room is the Maumee River, by far,” he told me. “If we could work on that watershed, it would go a long way to solving the lake’s problem.”

But environmental regulators have their own problem; farm runoff, like ballast water, was left largely untouched by the Clean Water Act of 1972. The goal of the law was to go after polluters that own pipes, referred to in regulatory parlance as “point sources.” The Clean Water Act didn’t adequately tackle farm runoff, which is classified as “nonpoint” pollution. The reason, basically, is that treating what comes out of the end of a pipe is easy. Tracking and regulating what comes off farm fields is more difficult, given the vagaries of weather, soil types, field pitch and even regulators’ ability to monitor what might be in the water pooling on pastures. 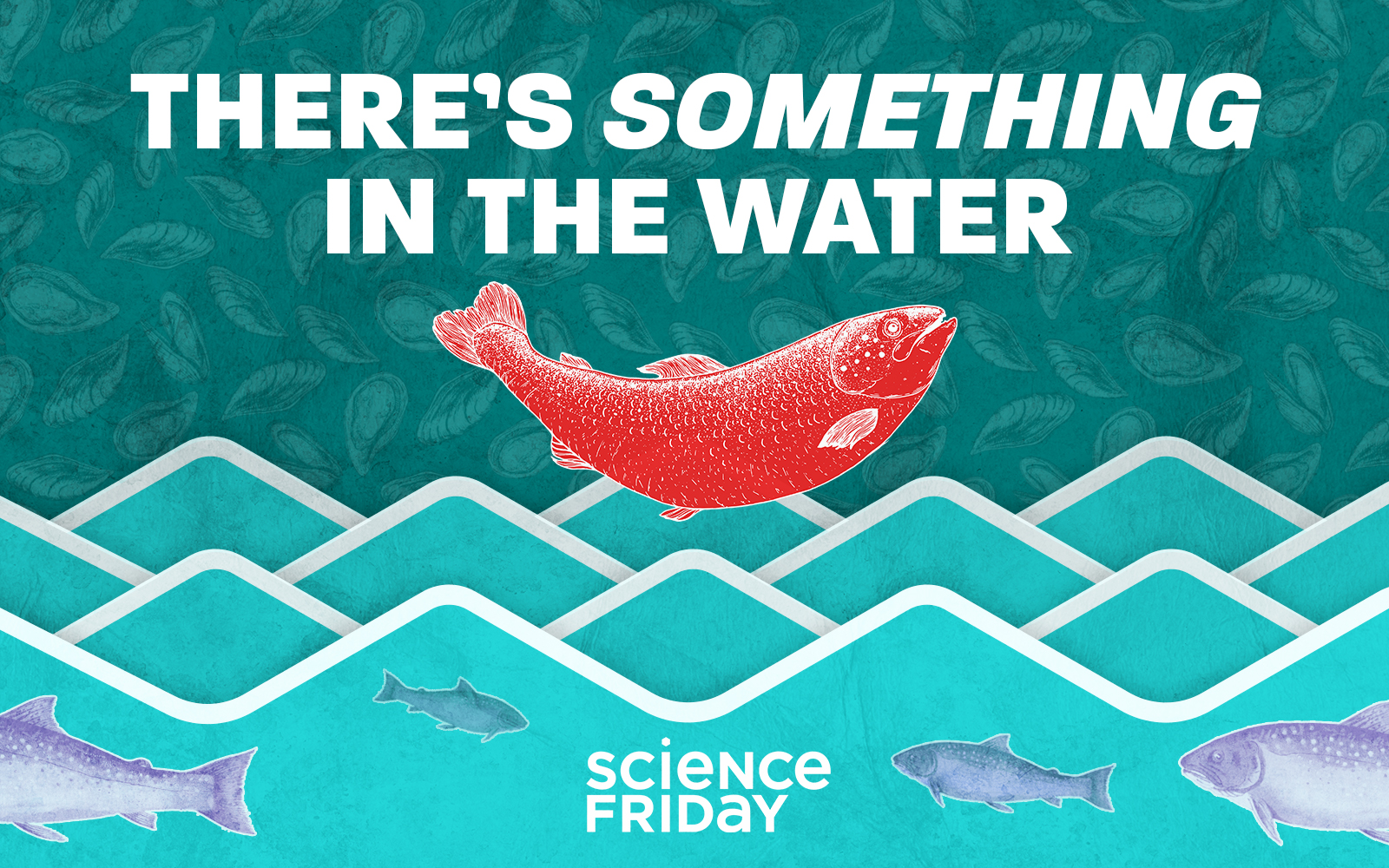 Join the Science Friday Book Club and author Dan Egan in NYC on February 20 for our live interactive event, There’s Something In The Water! See more details about guests and activities.

Change the law to force fertilizer reductions on the agriculture industry, and Bridgeman said, there is no reason the lake can’t recover once again, given that its water is replaced in less than three years. But he doubted farmers would be forced to alter their ways unless something drastic occurred to wake the public up, something as dramatic as the Cuyahoga fire of 1969 that helped spur the initial phosphorus reductions. He did not know what that might be.

“It may take,” he finally said with a sigh, “a major city having to shut down its water supply for a while.”

There are some 11 million people who rely on Lake Erie for their drinking water. Although microcystin—the toxin produced by the microcystis—can be removed through water purification, if a plume of the tasteless, odorless stuff somehow got sucked into drinking water intakes without water treatment plant operators realizing it, it could get into the public water supply and, potentially, poison an unsuspecting population.

It would take a lot of things to go wrong for a not-so-natural disaster like that to occur, and in late July 2014 nobody was thinking it would happen anytime soon.

On Friday, August 1, 2014, NOAA scientists were monitoring a budding microcystis bloom at the mouth of the Maumee River. The red pixels picked up by satellite imaging signaled the first wave in the seasonal bloom lake experts had not been expecting until the end of the month. Still, nobody was worried. It wasn’t a massive slick threatening to swallow the city’s water intake pipe. But within hours, like a dart hitting a bull’s-eye, winds drove the relatively tiny toxic plume straight into the intake. Routine sampling taken at 6:30 p.m. at the treatment plant revealed microcystin had gotten through and entered the public supply above the one part per billion threshold.

A second round of tests was ordered, and at 11 p.m. they confirmed that the toxin was indeed heading for Toledo’s taps. Unlike Carroll Township, Toledo had no connection to a neighboring water supply to turn to. Toledo Mayor Michael Collins informed the Ohio Environmental Protection Agency of the crisis, which instructed him to issue the do-not-drink order. At 1:20 a.m. Saturday, August 2, a news release went out:

DO NOT DRINK THE WATER. Alternative water should be used for drinking, making infant formula, making ice, brushing teeth and preparing food.

DO NOT BOIL THE WATER. Boiling the water will not destroy the toxins—it will increase concentrations of the toxins.

By 2 a.m. Collins was meeting with city officials to set up a plan for how to keep a metropolitan area of a half million from panicking about losing its most basic life necessity.

Reprinted from THE DEATH AND LIFE OF THE GREAT LAKES by Dan Egan. Copyright © 2018 by Dan Egan. Used with permission of the publisher, W.W. Norton & Company, Inc. All rights reserved.

Dan Egan is a reporter at the Milwaukee Journal Sentinel and a Senior Water Policy Fellow at the University of Wisconsin-Milwaukee. He’s the author of The Death and Life of the Great Lakes. (Norton, 2017) He’s based in Milwaukee, Wisconsin.

Can The Great Lakes Stay Great?

The North American Great Lakes are changing under the influence of pollution, invasive species, and climate change. How well will they weather this stress?

A Drone’s-Eye View Of An Algae Bloom

This picture, shot by a drone, reveals the verdant fingers of a blue-green algae bloom.