This article is part of the Book Club: ‘The Fifth Season’ spotlight

This story is part of our winter Book Club conversation about N.K. Jemisin’s book ‘The Fifth Season.’ Want to participate? Sign up for our newsletter or record a voice memo and send it to voices@sciencefriday.com.

Geologist Jeffrey Karson is no stranger to watching the Earth bleed.

He has closely observed molten lava snake down a slope, the material puckering and buckling into an array of patterns. It feels like standing next to a campfire or a wood burning stove at a safe distance, says Karson, but the angry amber glow screams a warning of scorching heat. The air is filled with the scent of charred earth, and loud crackles, hisses, and pops. If Karson is lucky, he might be able to hear a soft tinkling, like wind chimes, as the lava solidifies into glossy black and then cracks.

“We don’t get very much of this, but sometimes little pieces of glassy lava comes tumbling down the slope and in front of the flow it makes this sort of fairy castle sound,” Karson says, or “lava chimes,” as he calls it.

But most of the time, Karson isn’t out on one of his yearly field work expeditions in Iceland. He’s usually seeing lava in a parking lot in upstate New York. The lava flows are cooked up in the lab at the Lava Project at Syracuse University, where Karson and artist Robert Wysocki use the molten material to create sculptures and conduct scientific research.

After cooling, the end result looks like a piece of fine art: metallic beads, glassy sheets, amorphous ripples, even filamentous hair. But the diversity of formations are a product of the physical properties and dynamics of the lava. In this controlled, smaller-scale environment, “you can focus on the details that you would commonly miss if you’re in the middle of an eruption,” Karson says. “You’re worried about being burned up, or getting injured, and the poisonous gases and everything else that goes with natural eruptions.”

Inside The Lava Lab, Burning Questions

The lava-making operation allows Karson and other volcanologists to refine lava flow models, design diversion walls, and observe how lava interacts with different substrates, like snow, water, or wood, that may show up in its path.

“We have to understand how lava behaves if we ever want to have any hope of, say, controlling a lava flow, or predicting how far the lava can travel, or making barriers to deflect lava flows,” says Karson, a geology professor who has been co-directing the Lava Project with Wysocki since 2009. “These are all fun things, with very real applications.”

To make their own lava, the recipe begins with billion-year-old basaltic rock, a type of black lava that commonly blankets the ocean floor. The team uses basalt from a quarry in Wisconsin, left behind 1.2 billion years ago by the Midcontinent Rift. It comes in truckfulls and “looks like gravel from your driveway,” says Karson. “It’s so unsexy.”

But with a gas-fired tilt furnace, the team rejuvenates anywhere from 200 to 700 pounds of basalt back into flowing rivers of red and gold. The crucible, about half the size of a bathtub, stews the rock like a slow cooker before pouring it out at temperatures reaching as high as 2,200 degrees Fahrenheit. That’s five times hotter than baking pizza in a kitchen oven.

The Lava Project also gives more opportunities to collect data on lava flows to volcanologists and geologists, like Einat Lev at Columbia University, who is often at the mercy of nature.

If researchers are lucky enough to reach an erupting volcano in places like the Galápagos, Chile, or Iceland in time, “you can either get flows or not,” she says. Oftentimes, volcanologists are like crime scene investigators—they see the final morphology and have to work backwards to figure out how it was formed. “Usually, it’s only after the fact and if you have prior information, you can say, ‘oh, the lava flow went over vegetation or it went over a road.’”

The controlled pours in the lab are also a testing ground to try out methodologies for the field. For example, Lev was able try out new data collecting and filming procedures at the lab in 2012, which she later used to record more detailed views of the lava flows during the May 2018 Kilauea eruption in Hawaii.

In this video, the lava viciously crawls and bubbles over a sheet of ice. Credit: Robert Wysocki/Syracuse University Lava Project

Many variables influence lava flow, from the temperature, the slope of the hill, the material it flows over, to the viscosity.

“It isn’t like you can separate them easily in natural lava flows, so one of the things we try to do is isolate those individual parameters and see how they affect the lava,” he says.

The viscosity, for example, can determine everything from how fast the lava moves, to when it will stop flowing, to its final shape, Karson explains. In the lab, they’ll manipulate the consistency by changing the amount of crystals in the lava, the composition, or the heat.

The lava’s viscosity can also inform researchers about the type volcano and its shape. For instance, if the lava is like runny honey it might gush from a shield volcano—the thinner material flows readily, but doesn’t bunch up and results in gentle slopes. On the other hand, lava that is like gloppy peanut butter tends to be from more explosive volcanoes, explains Karson. (“I always get hungry when I’m talking about these things,” he says.) The more viscous lava stacks up, resulting in steep-sided volcanoes, such as those around the Pacific Ring of Fire or the Andes, he says.

Wysocki and Karson want to try to emulate these various volcanic terrains in landscape art in the lab—everything from the “whipped cream” mountains to the rolling “maple syrup” slopes to the shimmery, three-dimensional “lava landscapes that you would see in Iceland or Hawaii or on the bottom of the ocean,” he says.

Active volcanoes are dangerous, and lava can eat up and destroy everything in its wake. But by studying them in an upstate New York parking lot—miles away from volcanic activity—researchers can learn more about this monstrous material in a controlled setting.

“Lava is something we normally associate with natural disasters, but then you see it in person up close in a controlled setting, it’s like you have the power of Mother Nature in your hand,” says Lev. “These lava flows [at Syracuse University] can help maybe make people think differently about our relationship with nature.”

For Karson, there’s beauty in the dangerous power of nature.

Explore the wide variety of lava art (and learn about the science that created them) from the Lava Project below.

All photos are courtesy of Jeffrey Karson and the Syracuse University Lava Project.

Take A Voyage To The Volcanoes With SciFri!

Almost anytime lava is poured over a wet material, the heat causes the liquid to vaporize into steam, Karson explains. The escaping steam collects under the lava, blowing bubbles “like blowing bubblegum or balloons” until the skin stretches so tight it bursts, he says.

The lab has created lava bubbles over the size of grapefruit to basketballs. But, “they all burst or are too fragile to survive,” Karson says. 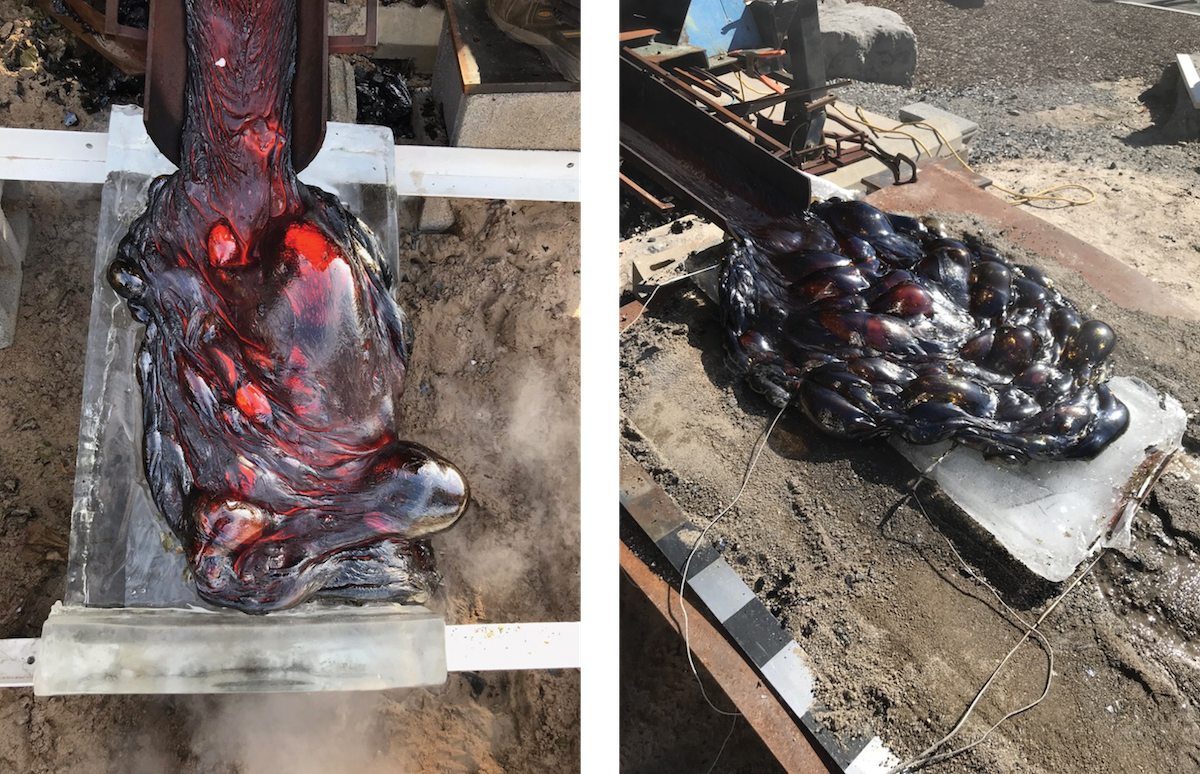 Ice and snow can create a vapor cushion, causing the lava flow to skate across the surface “like an air hockey game,” Karson explains. “It’s very unexpected, and is also a real potential hazard in places where lava flows interact with ice and snow… like Iceland where lava flows occur near the glacial ice caps or Siberia, for example.” Read more about the Lava Project’s findings on lava and ice interactions in this 2013 Geology paper.

Read ‘The Fifth Season’ With The SciFri Book Club!

Sometimes, the colors on the surface of cooled lava can look like a lustrous peacock or a rainbow, says Karson. “We know it has something to do with the way lava flow interacts with the oxygen, but it’s something we haven’t explored in any kind of great detail yet,” says Karson. “It’s just one more interesting study that lies ahead of us.”

Do you have an eye on a Sci Candy?

An image is worth a thousand words—or maybe even a Sci Candy. Know an image that captures a fascinating science concept? Send us your story! Email scicandy@sciencefriday.com.

Investigate different types of volcanic eruptions and linear equations to see if you, a car, Usain Bolt, or a tortoise could survive by simply running away.

The Origin Of The Word ‘Crater’

It has more to do with wine than lava.