These redistricting puzzles are kind of like Sudoku. They’re also a lot like the political practice of gerrymandering. Have fun.

One of the basic underpinnings of U.S. democracy is that we use voting to determine who represents us at the city, state, and federal levels of government. The U.S. Congress—that collection of 100 senators and 435 voting representatives that gather in Washington, D.C. to create and vote on things like laws, taxes, wars, and budgets—is the primary institution that gives voters representation in the federal government.

States with more than one representative are responsible for dividing the state into congressional districts, or regions of the state that vote for a single congressional representative. States use census data about the distribution, number, and kinds of voters in the state to determine voting district boundaries after each federal apportionment.

Now how does one go about drawing those districts? And are district maps always fair to the voters they are meant to represent? In short, lots of different mapping tactics are used for redistricting, and no, the U.S. Supreme Court has found that many of the resulting maps are unconstitutional and discriminatory in nature.

[Want to connect with fellow STEM educators? Join in on the discussion in SciFri’s Educator’s Lounge!]

In 2017 alone, the U.S. Supreme Court heard cases against the states of Virginia, Alabama and North Carolina following redistricting informed by the 2010 census. Each of the states was accused of drawing “packed” districts based on the race of voters, thus diminishing the power of their votes. This practice of strategic redistricting is called gerrymandering, and can be generally defined as the practice of drawing district lines to ensure that a specific political party, racial minority, or other interest group is disadvantaged in local, state, or national elections

In all cases, the court ruled that using race to guide redistricting was unconstitutional. However, whether it is constitutional to draw districts so that one political party has an advantage over another remains to be determined.  As of this writing, the U.S. Supreme Court has yet to rule on Gill v. Whitford, a case that will determine whether gerrymandering based on the political party is something that the U.S. Supreme Court can pass judgment on, and if so, whether it is permitted under the U.S. Constitution.

Now comes the fun part. Let’s do some redistricting puzzles! In this activity, you’ll be challenged with a series of district-drawing puzzles, each of which is designed to convey a redistricting rule or practice. Just like real redistricting, every one of these puzzles has more than one correct solution.

So grab a pencil, print out a Redistricting Challenges Sheet, and get scrolling. Here we go.

Every state does redistricting a little bit differently, but there are some general rules that most states use to guide the process. The rules are the same whether you’re an elected member of the state legislature in Oregon, part of an appointed commission in Montana, or part of an independent nonpartisan redistricting commission in the state of California. If you are responsible for redistricting, you should adhere to three traditional principles: contiguity, compactness, and population equality.

For these challenges, you will be charged with adhering to one of the three traditional redistricting principles as you draw districts in simplified “states.” Many state laws offer guidelines about how to “draw within the lines” to maintain pre-existing communities of interest, jive with natural topography like rivers and mountains, and stay within county or state lines. In that spirit, you may only draw districts by tracing along the gray lines in the following challenges.

Divide each of the following states into the assigned number of contiguous districts, without dividing blocks of squares that are the same color. Make sure that all parts of a district are touching one another by segments at least two squares wide 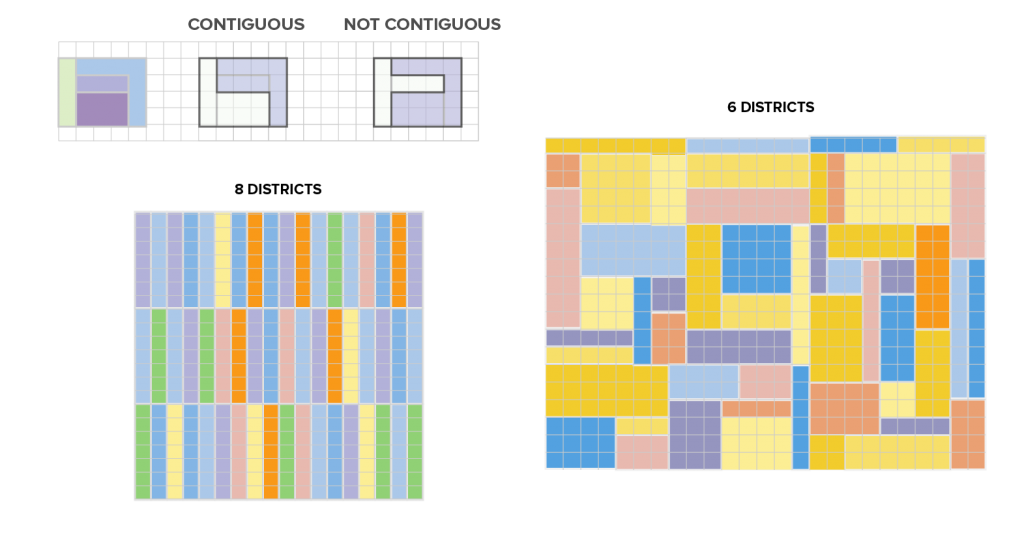 An ideal district should be convex and compact, not long and thin (“dispersed”), or have any projections or dents (“indentations”) in it. In other words, an ideal district should be more like a circle, square, or polygon, and less like a hot dog, salamander, or star.  This is another way of guaranteeing some amount of proximity between voters of the same district, while also guarding against too much “creativity” when redistricting to bias election outcomes.

There are many mathematical ways to measure geometric compactness of districts that take the shape of formulas or equations, often named for their creators (e.g. Polsby-Popper, Boyce-Clark, Reock) or how they are measured (e.g. “convex hull,” “length/width ratio”). 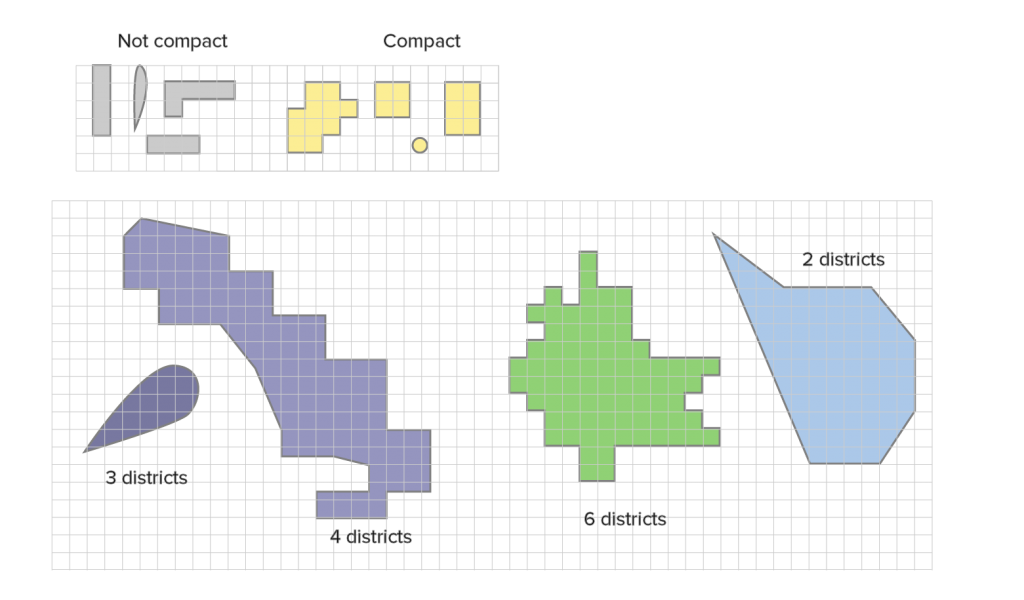 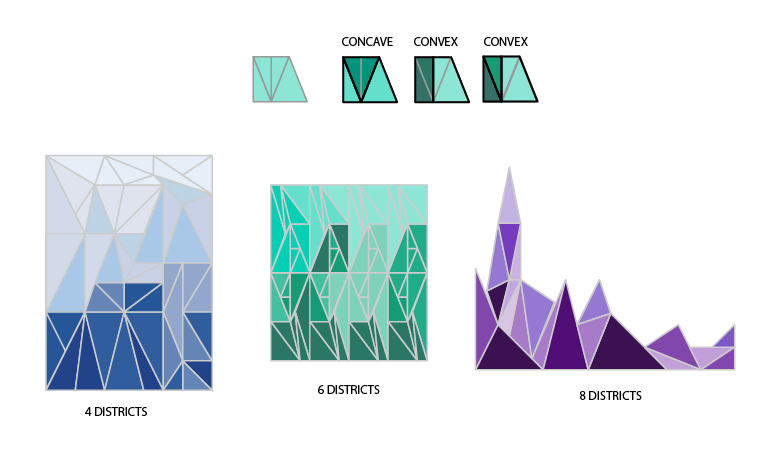 Rank the following districts according to their Polsby-Popper ratio from most to least compact. 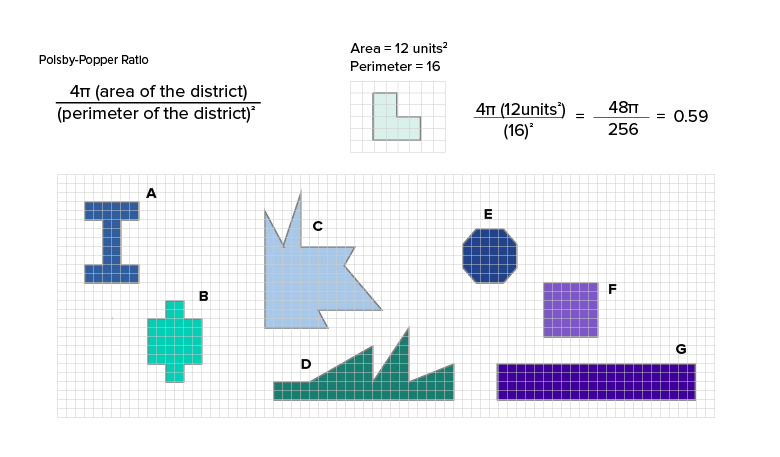 In a fair state, every district should contain about the same number of voters. This ensures that no vote is more valuable than any other in determining the outcome of an election. Divide each of the following states into the assigned number of districts so that each district has an equal population size. 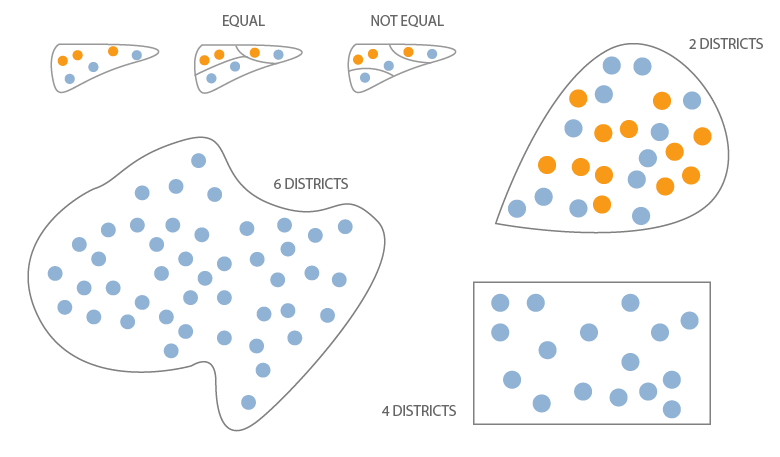 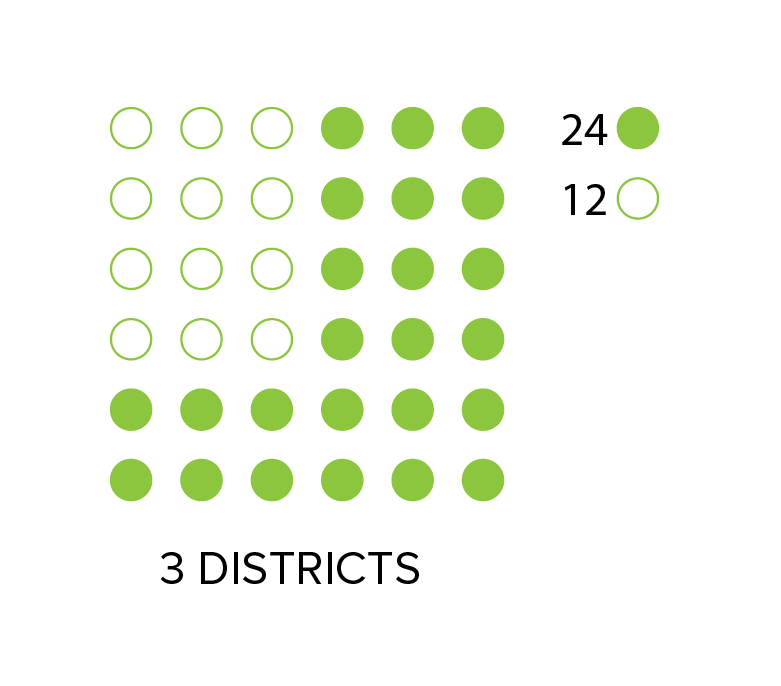 Ideally, the outcomes of district elections would mirror the political and social interests of the state population as a whole. Most states don’t have explicit laws about this ideal, but many recent and historical cases have been brought to the Supreme Court on the grounds that the U.S. Constitution protects this premise.

In the imaginary state to the right, there are 36 voters that must be divided into three districts with 12 voters in each district. This state, like all states, contains voters who tend to vote a certain way on key issues or political party candidates. In this imaginary state, 12 of the voters are open circle voters (1/3 of the population), and the other 24 are filled-circle voters (2/3 of the population). In order to win a district, voters of one type must make up the majority (7 or more) of the voters in a district.

Your challenge is to draw fair districts for each of the following imaginary states, where each dot represents a block of 10,000 voters. For each state, the number of districts  and the ideal voting outcome is indicated. open-circle voters are in the minority in each state. As you draw your districts, make sure that you follow the principles of population equality, compactness, and contiguity. 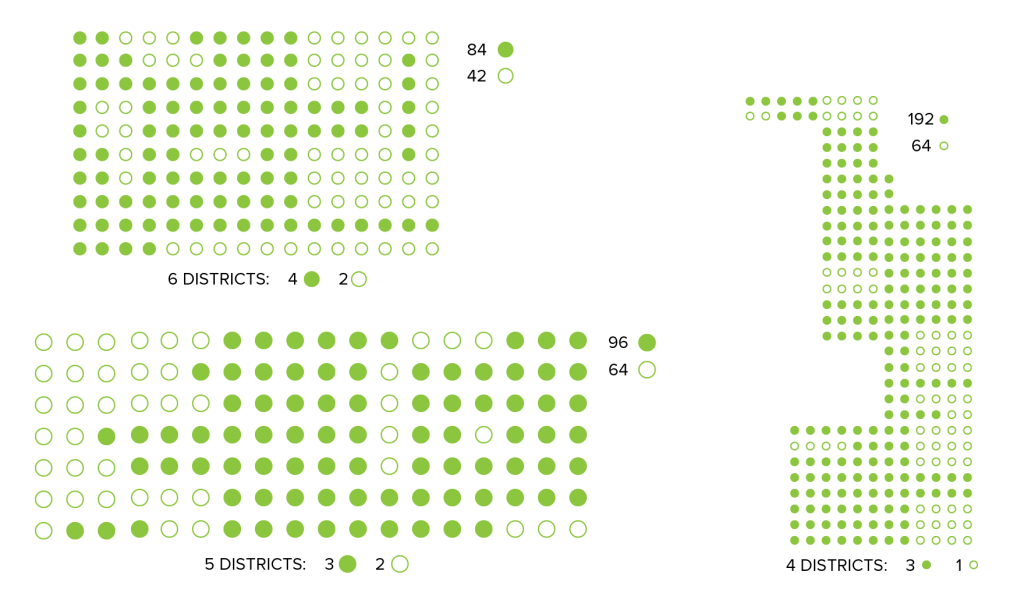 In the first series of puzzles, you practiced redistricting for fairness and tradition. For these puzzles, you must try to draw your districts to increase the influence of one group of voters over the other, helping them win more districts in future elections. This process of manipulating district boundaries to give an advantage to a specific party or group is called gerrymandering.

The following puzzles challenge you to redefine district boundaries using one of three common gerrymandering approaches: cracking, packing, or stacking. Here are the new rules:

You’ll use the same three states you used in the fairness challenges above, with the same requirements for district number. But this time, your goal is to gerrymander the new district lines to alter voting outcomes in the state to favor one of the two voter types.

Cracking Puzzle
Split the clusters of voters into different districts so that the filled-circle voters have a majority in every district. 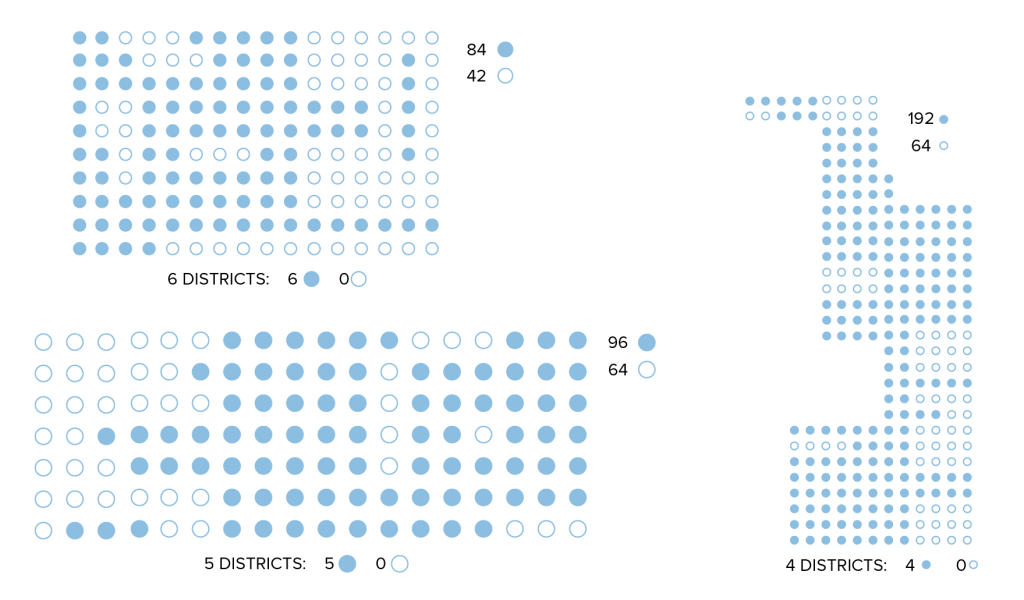 Packing Puzzle
Try to pack the groups of open-circle voters into one or two districts, so that filled-circle voters win more districts than they should under a fair redistricting plan. 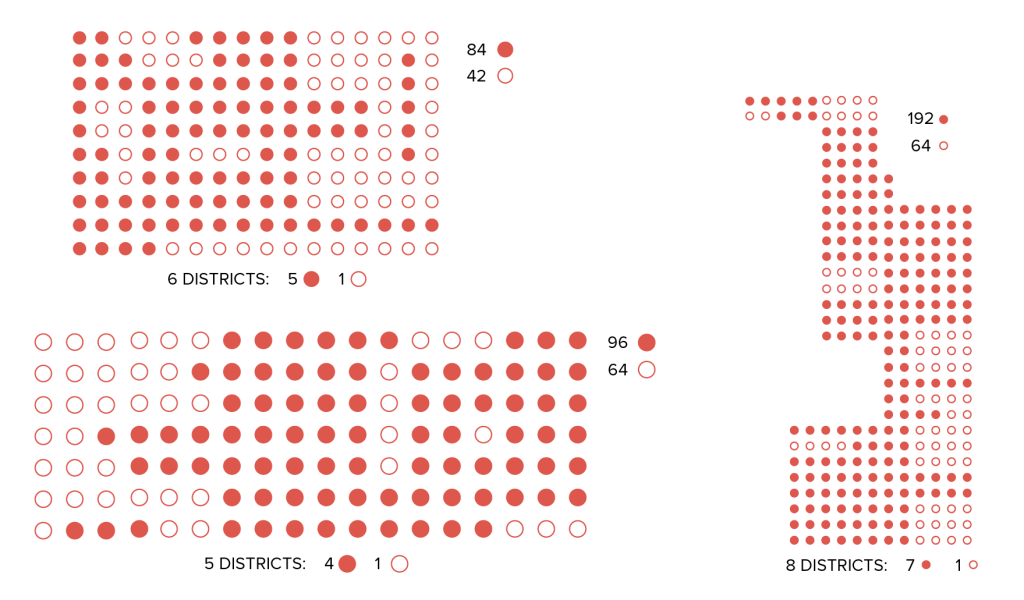 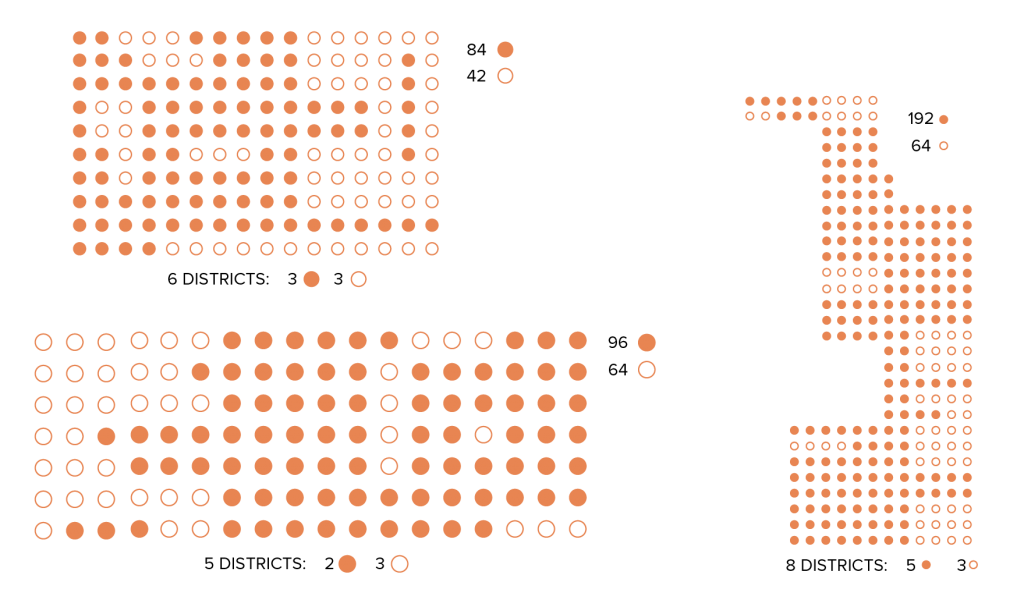 As you discovered in your gerrymandering puzzles, gerrymandered districts tend to look weird because they are often neither compact nor contiguous. Take a look at the following series of 8 districts taken from real states from the 115th congressional district map. Experts in the fields of political science, statistics, and sociology have deemed four of these districts as some of “the most gerrymandered” districts in the United States, in part because they are the least compact. Can you guess which ones may have been gerrymandered? 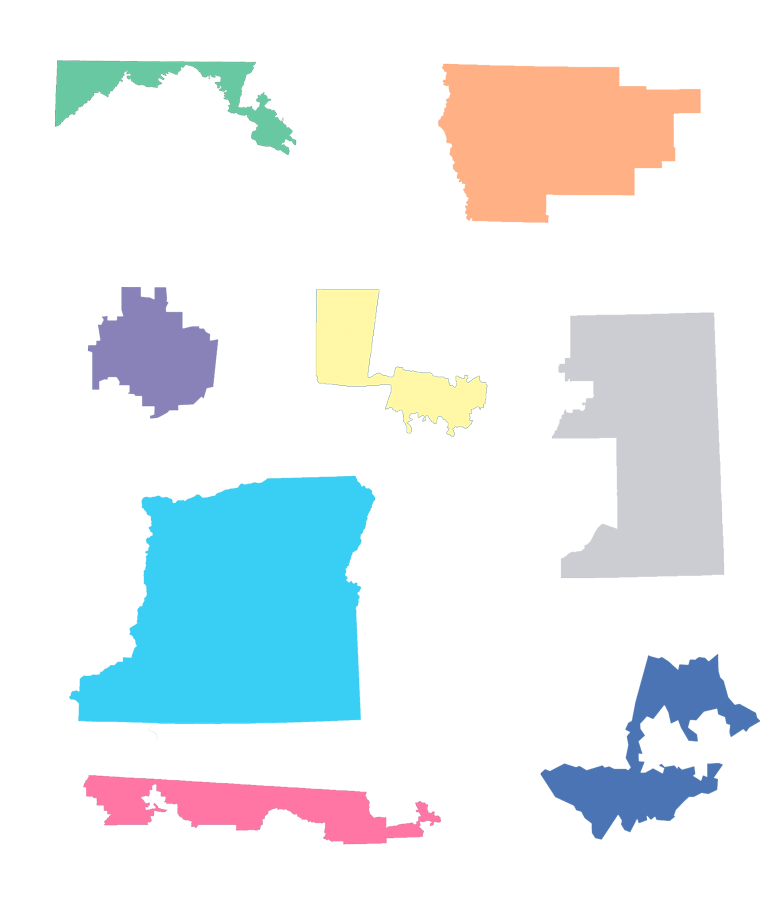 Districts like the ones above present new puzzles for state and federal courts who must decide whether a state’s redistricting plan is fair or unconstitutional. Is there a way to tell whether districts were drawn to intentionally disadvantage voters of a certain race, political party, or religion? Is it possible to make a rule or law that can be applied consistently to districts to determine if districts have been unfairly gerrymandered? Oliver Roeder, senior writer at FiveThirtyEight, and Moon Duchin, associate professor of mathematics at Tufts University joined Science Friday to describe one potential measure of fairness called the “efficiency gap,” and the challenges and opportunities for getting justices to use math to judge district fairness.

Does Math Have A Place In The Courtroom?

Gerrymandering is quite old. The term “gerrymander” was coined to describe a peculiar salamander-shaped district created by Massachusetts Governor Elbridge Gerry (pronounced with a hard “g,” like Gary) who pioneered the practice back in 1812.

Since then, gerrymandering has grown both increasingly common and complex with higher quality voter data, advanced mapping software, and machine learning. Consequently, detecting where gerrymandering has occurred, determining whether it is discriminatory in nature, and figuring out how it has influenced elections have all become increasingly difficult.

Teachers who field tested this resource had the following advice for teachers adopting this resource:
Michelle from Ohio says: If this is a new topic for the learners, it would be beneficial to review new vocabulary beforehand.

Resource and illustration by Ariel Zych

If you have questions about this resource or would like to share your experience using it with students, please e-mail us at educate@sciencefriday.com or tweet to @scifri.

Interpret The Impacts Of Rising Ocean Temperatures On Ecosystems

Where do fish go when the water gets warm? It depends on the species.

How Big Was This Squid?

Learn how to determine the size of a Humboldt squid using a beak left behind in a whale's stomach in this data-rich math activity.