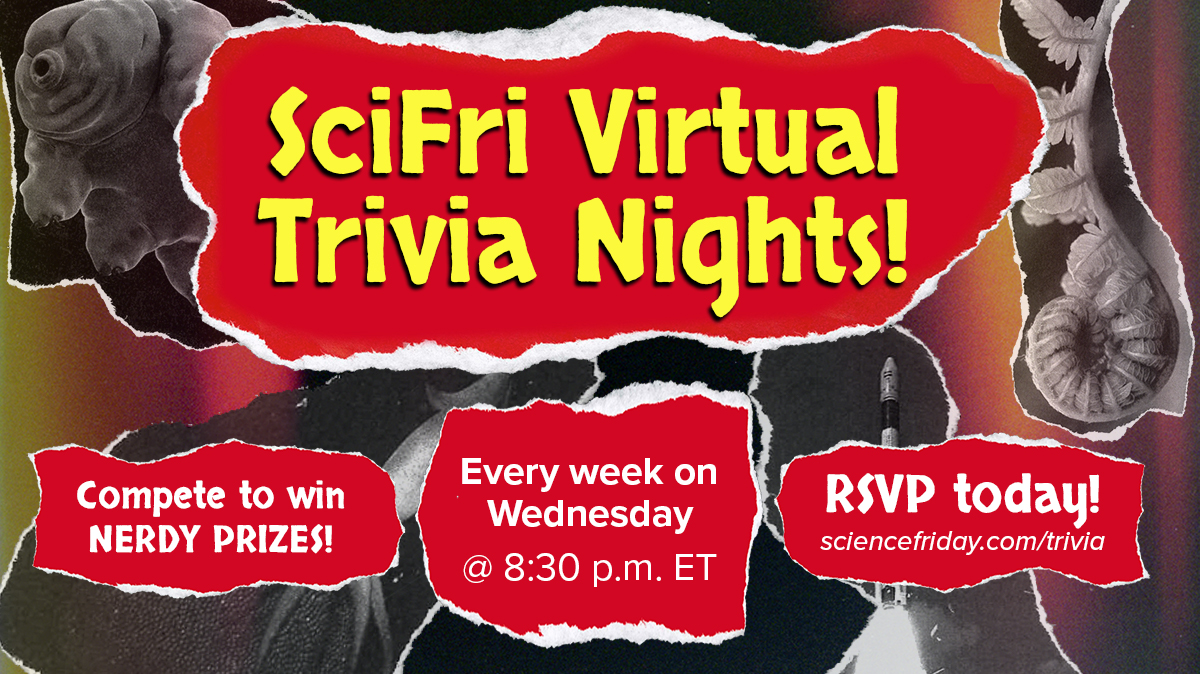 We’re celebrating our 30th anniversary this week—and with 30 years of radio comes more than enough material for a round of trivia. SciFri Trivia extraordinaire and host Diana Montano quizzes Ira on how well he remembers some of the stories he’s covered on SciFri during its last three decades.

Want to join the fun? Diana hosts virtual SciFri Trivia every Wednesday at 8:30 p.m. ET / 5:30 p.m. PT on Youtube and you are invited! Play by yourself or with a group and, if you win, enjoy the honor of naming one of the many plants in the SciFri office—and more!

Diana Montano is the Experiences Manager at Science Friday, where she creates live events and partnerships to delight and engage audiences in the world of science.

IRA FLATOW: As you listeners may know, here at Science Friday, we’re a bunch of nerds. Yeah. And I mean that in the best way. It’s a badge of honor around here.

And what do nerds like to do? Trivia. Yes. So let’s do some right now. One of our resident trivia nerds, SciFri producer Kathleen Davis, joins us. Hi, Kathleen.

KATHLEEN DAVIS: Hey, Ira. You are completely right. I am a big old trivia nerd.

IRA FLATOW: As we all are around here.

KATHLEEN DAVIS: The thing is, though, I love to play trivia, but I am not very good at it. So it’s kind of a love-hate relationship.

IRA FLATOW: You know, I have someone who can help you.

KATHLEEN DAVIS: Seriously. One of my favorite trivia events is Science Friday trivia, which happens every Wednesday night on SciFri’s YouTube channel.

IRA FLATOW: And in celebration of our 30th anniversary year, resident SciFri trivia host Diana Montano has suggested we give our brains a test run before next week’s trivia night. And I always listen to Diana’s suggestions. So welcome, Diana.

DIANA MONTANO: Hey, Ira. Hey, Kathleen. It is great to be here with you both. Science Friday trivia is so much fun– not to toot my own horn, of course.

KATHLEEN DAVIS: I am inclined to agree, even when I get a big old goose egg.

DIANA MONTANO: It’s all right. I’m also a trivia host, but not great at trivia, Kathleen, so we’re in the same boat. Well, we’ve done science movie trivia, charismatic creature trivia, outer space trivia, you name it. We even test our fans’ listening skills. Round 3 almost every game is “Last Week on SciFri,” so if you listen to the show, you have a leg up on those questions.

It’s a whole lot of fun, and Wednesday has become my second favorite day of the week– after Fridays, of course. I’ve got some trivia questions prepared for you this week, Ira and Kathleen, that are all about a favorite winter pastime of ours here at Science Friday– birds and birding. Are you ready to go?

IRA FLATOW: Well, what do you say, Kathleen? You ready to help me out a bit here? Because–

KATHLEEN DAVIS: Well, I was going to say you are here to help me, but I guess we’ll see how we do.

IRA FLATOW: This is Science Friday from WNYC Studios. In case you just joined us, we’re playing Science Friday trivia with our trivia host with the most, Diana Montano, and SciFri producer Kathleen Davis.

DIANA MONTANO: All right, let’s do this. Unlike most birds, the male club-winged manakins of Ecuador have evolved solid wing bones. That makes it harder to fly, but easier to do what?

A, make a buzzing sound to attract female manakins. B, forage in the dirt for seeds. C, fight other male club-winged manakins. Or D, use its wing to crack open other birds’ eggs.

So again, it’s got solid wing bones. Does it make a sound, forage for seeds, fight other birds, or open bird eggs with those wings?

IRA FLATOW: There’s no E selection on this one?

DIANA MONTANO: It’s one of those, I promise.

IRA FLATOW: Of course I remember that, Kathleen. Don’t you? Absolutely.

IRA FLATOW: You want to help me out? What have you got? Yeah.

KATHLEEN DAVIS: Well, I was going to say that maybe because they don’t have the hollow bones, which help birds fly, maybe that means that they stay on the ground.

IRA FLATOW: I thought the answer would have been, which is not one of the options, that they can glide better with their wings locked like that. But I’ll go with your gut on this one.

KATHLEEN DAVIS: Yeah, I’m going to say I’m pretty sure that it would be so that they can be heavier and stay closer to the ground. So Ira, if you want to come with me, I’m going to say that foraging, B, is the right answer.

DIANA MONTANO: All right, your final answer was B, foraging in dirt for seeds. And unfortunately, I’ve stumped you both with this one. It’s actually A, making a buzzing sound to attract female birds.

DIANA MONTANO: That’s right. So they still can fly. They don’t fly quite as well as some other birds. But they swing their wings behind their heads at a rate of about 107 times per second and beat them together to actually create a buzzing sound.

IRA FLATOW: Want to do that again? No.

DIANA MONTANO: I did write this question so I could do that, yeah.

IRA FLATOW: All right. Well, let’s move on after this wreckage.

DIANA MONTANO: All right, you’ve got another chance to redeem yourselves.

IRA FLATOW: Are you ready for question two?

KATHLEEN DAVIS: Yes, let’s do it.

IRA FLATOW: No, but ask it anyhow. Go ahead.

DIANA MONTANO: All right, here it comes. So last year’s pandemic shutdown shifted the way many of us worked, including white-crowned sparrows in San Francisco. Research published in October 2020 showed that sparrows’ behaviors changed in what specific way?

A, they flew lower throughout the city. B, they sang in lower registers. C, they went to bed earlier. Or D, they laid more eggs.

KATHLEEN DAVIS: I think I actually know this one, because I remember reading about this during the pandemic. I am pretty, pretty sure, Ira, that it is that they sang in a different register.

IRA FLATOW: Yeah. Yeah, yeah. I was going to say that also.

KATHLEEN DAVIS: OK, I think we should go with B.

DIANA MONTANO: Well, you’ve come out with one point, because that is the correct answer.

DIANA MONTANO: So in 2012, these researchers actually found that they slowly pitched their songs to a higher register to be heard over city noise. So they just really, in 2020, shifted their songs back down when people stopped commuting and moving throughout the city, because they could be heard again. So they just kind of went back to their regular singing, which one day we all probably will, too.

IRA FLATOW: Not me. You don’t want to hear it.

KATHLEEN DAVIS: OK, Diana. Give it to us straight. How did we do?

IRA FLATOW: Yeah. Yeah, what is our score, Diana?

DIANA MONTANO: You got one out of two, and I’ve got to say, that’s a pretty great score. So congratulations to you two.

DIANA MONTANO: You’re welcome anytime at our free Science Friday trivia. It’s really fun. So I hope you both team up and come to a future trivia.

KATHLEEN DAVIS: I would love to. Our team will not do very well, but–

IRA FLATOW: Yeah. Well, absolutely. Thanks for dropping by, Diana. It’s always fun to talk trivia with you. And where can our listeners learn more and see if they can beat our record, which– not really hard to do, I don’t think. Tell them.

DIANA MONTANO: Well, it is always a pleasure to try and stump you both. If you want to join us for our weekly trivia nights every Wednesday evening at 8:30 PM Eastern, or hear about our special themed trivia nights coming up, you can sign up on our website, sciencefriday.com/trivia.

KATHLEEN DAVIS: Thank you, Ira. I will wear that name like a badge of honor.

Be the most popular person in your group thread: bring your team to the nerdiest virtual trivia night out there, full of science nerdiness!

Hop into our audio time machine! Sign up for our newsletter to get never-before digitized stories from our archive.

Read More
We use cookies on our website to give you the most relevant experience by remembering your preferences and repeat visits. By clicking “Accept,” you consent to the use of all the cookies. Read more.
COOKIE SETTINGSACCEPT
Manage consent