In 2011, excavators at a mine in Alberta, Canada, unearthed a surprise: a 110 million-year-old fossil of a nodosaur (a type of armored dinosaur) so impeccably preserved that it still had skin and armor. The chances of an organism leaving behind even a bone to fossilize are extremely low, so for paleontologists, this specimen was the find of a lifetime.

Why don’t more organisms leave behind fossils after they die?

Typically, when an animal dies in nature, its body is quickly pulled apart by vultures and other scavengers, big and small. Decomposers like bacteria, fungi, and insects, and physical factors such as water, wind, and sunlight, further break down the body. Within weeks or even days, there is nothing left.

While the remains of most organisms disappear within a matter of days, some stick around for millions of years! Why is that?

Sometimes, parts of an organism escape decay. Fossils are the remains or traces of organisms that lived 10,000 years ago or longer. Why do some creatures leave behind fossils while others decompose entirely? What conditions support fossilization?

These questions are answered by taphonomy, the study of the processes involved in fossilization, such as decay, burial, and preservation. In this resource, you will learn about some of the environmental conditions that contribute to fossilization, and why some parts of organisms are more likely to fossilize than others parts.

For anyone interested in taphonomy, an instructive place to visit is the La Brea Tar Pits in Los Angeles, a fossil site that has been preserving dead animals for 10,000 years. The “tar” is actually thick, black asphalt, which has formed from oil that seeped through underground rocks.

Watch the video below about the La Brea Tar Pits. Pay close attention to how the fossils look, taking note of features like color and whether or not they have flesh hanging off them.

To better understand how the fossils at the La Brea Tar Pits formed, let’s examine one animal that was excavated: the Merriam’s teratorn (Teratornis merriami), a giant prehistoric, vulture-like bird that lived in North America during the last Ice Age and went extinct around 11,000 years ago.

(Educators don’t miss the Educator Guide, Student Handouts and Fossilize Me! Card Game that go with this activity.)

The wings of modern birds are very similar to those of the teratorn in both external and internal structure. Let’s take a look at a chicken wing, specifically.

In the image above, you can see different tissues of the chicken wing.

What types of animal remains do you think you could find at La Brea Tar Pits?

Based on your chicken and teratorn observations, you probably guessed that only the “hard parts” (i.e., the bones) of a chicken wing would fossilize in the La Brea Tar Pits. Indeed, scientists at La Brea have excavated and identified lots of fossilized hard parts, including teeth, beaks, claws, the outer skeletons of invertebrates, and the defensive body armor plates of dinosaurs and shells.

The asphalt at the La Brea Tar Pits is just one example of a substrate where fossils can occur. But there are many other substrates that can yield different types of fossils. For example, organisms can become buried in lake sediment, make impressions on mud, get covered in volcanic ash, freeze in ice, or get caught in tree sap.

What factors affect how fast an organism decays?

How do you think decay is affected by the following environmental factors?

Write down your thoughts in your science notebook.

Generally, the quicker an organism’s remains are isolated from weather and decomposers, the less they will decay—and the greater the chance they might eventually fossilize. In this activity, you will modify the environment around several chicken wings, and then compare the extent to which each decomposes.

Time required: 1-2 hours to set up (observations over 2-4 weeks)

Note: Depending on the environmental factor you choose to study, you might need additional materials, such as saran wrap, soil, sand, oil, a cooler with ice, etc.

Think about the places in which fossils are found. The limestone of an ancient seabed might hold the remains of an ammonite; volcanic ash from an eruption long ago could preserve a three-toed horse skeleton; a spot in the Arctic tundra may encase what’s left of a mammoth. In each of these situations, the environmental conditions prevented decomposition, at least to some extent.

Using the protocol below, you will investigate how modifying one environmental factor affects chicken wing decay. For example, you could focus on:

If you’re doing this as a class, each group should pick a different environmental factor to investigate so that they can discuss their results later.

Once you decide which factor you want to study, set up your treatments using the protocol in the slide show. Reserve one treatment as your control. Before you start the experiment, be sure to read the SAFETY CONSIDERATIONS below.

SAFE DISPOSAL: Take care when disposing of raw meat, because it might harbor bacteria, especially after being left outside for a few weeks. Put the containers and all their contents in a plastic bag and knot it before throwing it in the garbage. DO NOT REUSE ANY OF THE EQUIPMENT! As you have done throughout the experiment, make sure to wash your hands thoroughly at the end.

What happens to the soft parts of an organism? Why aren’t they usually preserved?

The environmental conditions at the time of death determine which features of an organism are preserved, and how. The “soft parts” of an organism will be the first to decay, because they’re most exposed to the environment and most susceptible to being digested by microorganisms. This is why most fossils we find entail hard parts like teeth, bones, and horns.

Let’s go back to the perplexing case of preservation in La Brea Tar Pits.

Some materials, like ice, tree resin, lake sediments, peat, and volcanic ash, can preserve the hard parts, and sometimes even the soft parts—such as skin, eyes, and hair—in an unaltered state, meaning the original composition is largely intact. 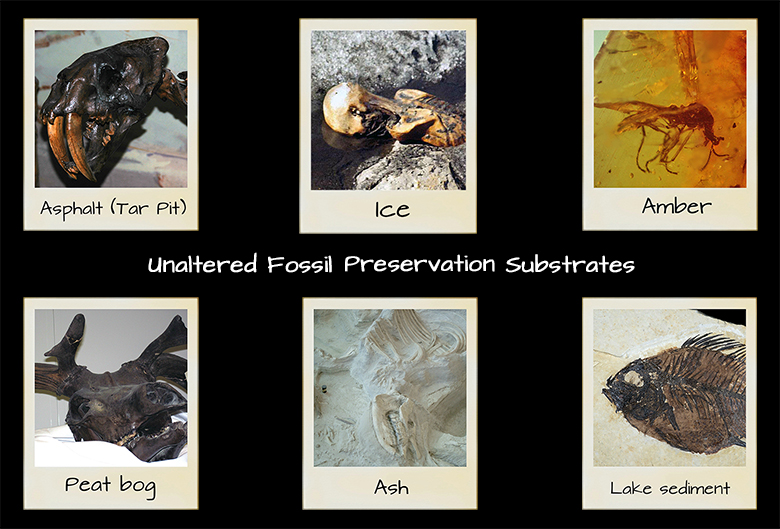 At the La Brea tar pits, we find fossils that have been essentially “embalmed” in asphalt for tens of thousands of years without exposure to the air, yet there is no soft tissue on them. How could that be? Watch this other video and look for clues!

When animals got stuck in the La Brea Tar Pits, most of their tissue was quickly torn apart by everything from big carnivores to tiny scavenger beetles. What remained sunk into the asphalt. When you watched the video, did you notice bubbles forming in the asphalt? That was a clue as to what happened to the soft tissue! The bubbles are produced by bacteria that live in the asphalt, which digest any soft tissue left on bones.

Want to explore more about fossils? 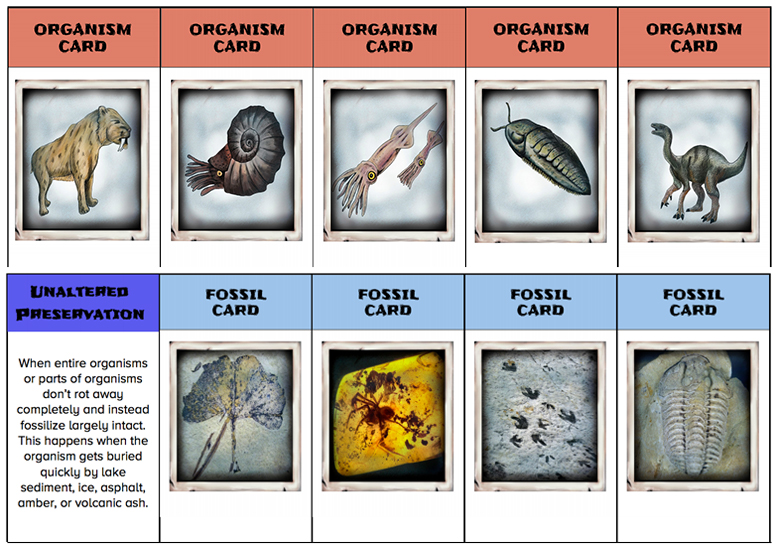 Performance expectations:
MS-LS4-1. Analyze and interpret data for patterns in the fossil record that document the existence, diversity, extinction, and change of life forms throughout the history of life on Earth under the assumption that natural laws operate today as in the past.

MS-ESS2-1. Develop a model to describe the cycling of Earth’s materials and the flow of energy that drives this process.

Marta Toran is a former middle and high school science teacher and serves as a K–12 STEM outreach coordinator at Appalachian State University in North Carolina. Her daily goal is to bring excitement about science to as many rural classrooms as possible. She can often be spied hauling rocks or dollar-store finds for use in science projects and exhibits.

How Do Fossils Form? Fossilize Me! Card Game

Explore the diversity of fossil types and test your knowledge with the Fossilize Me! Card Game. Can you successfully put together an organism, type of preservation, and fossil...