This article is part of our special coverage of Cassini. Listen to one of the interviews Science Friday conducted with the Cassini team and marvel at the astounding images the orbiter took of Saturn and its moons. Plus, did you know the Cassini team has their own choir? 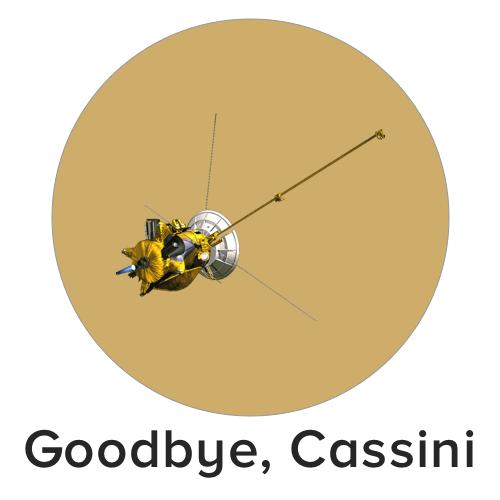 On September 15, 2017, NASA’s Cassini spacecraft will use its remaining fuel and the gravity of a nearby moon to hurl itself into the atmosphere of Saturn, where it will burn and disintegrate like a meteor. Cassini’s fiery end—which scientists are engineering in order to ensure that the spacecraft won’t contaminate any of Saturn’s moons—will mark the conclusion of its nearly 20-year voyage through space.

Cassini sailed past Saturn, Jupiter, and Venus. It revealed haunting scenes of solar storms brewing, spongy cosmic surfaces, and undetected views of Saturn’s icy rings. And throughout it all, the itinerant spacecraft sent postcards home, providing scientists and the public with some of our best images of the outer solar system.

December 2000: Jupiter Goes To The Movies

[Jupiter is ready for its close-up.]

[How the moon lost its magnetism.]

August 2008: Enceladus Is Ready For Its Close-Up

[Enceladus could become a top candidate for life.]

February 2010: Jupiter is Red, Earth Is Blue. Here’s The Odysseus Crater, From A Valentine’s Day View.

[Looking for some more geeky valentines? We’ve got you covered.]

February 2011:  Saturn Chases Its Own Tail

December 2011: Two Moons Are Better Than One

[Titan could have the right chemical conditions to create precursors to life.]

November 2012: A Storm Brews On Saturn

One mission is winding down. Another has just begun. A look at what’s next for each.