Cephalopods like the octopus depicted above are considered to be masters of camouflage. In other words, they are really great at blending in with their environment. How do they do it? Let’s take a close look at cephalopod skin to understand the mechanisms of camouflage.

Severus Snape once told Harry Potter, in Harry Potter and the Order of the Phoenix: “The mind is a complex and many-layered thing.” The same might be said of cephalopod skin. Well, it may not have as many layers as your mind, but it does have at least three distinct layers. Going from the outside in, we find a chromatophore layer, an iridophore layer, and a leucophore layer. The chromatophore layer uses spots of pigment to paint patterns; the iridophore layer bends and bounces light to display shimmering colors; the leucophore layer serves as a reflective background for everything above it. Each layer of cephalopod skin contributes its own little bit of artistry to the overall painting.

In this lesson, we will look at the first layer, the chromatophore layer, in detail.

Let’s take a close look to see what’s going on in the skin of a cephalopod:

What colors and shapes do you see in these close-up views of cephalopod skin? What details can you make out? How do you think these tiny changes affect the larger view of the cephalopod?

The first layer is called the chromatophore layer. (The word chromatophore means “bearer of color”). A chromatophore is an organ that contains pigments. In cephalopods, those pigments are limited to the colors yellow, red, and brown.

We humans have pigment in our skin too, primarily in the form of melanin. Unlike cephalopods, however, we can’t really change the color of our skin (except maybe by blushing, bruising, getting a tan or a sunburn). So how do cephalopods do it?

Cephalopods are like the genie from the story of Aladdin. They have this incredible power built right into their skins. However, in the same way that the genie is limited to fulfilling only three wishes, cephalopods effectively limit their use of their “phenomenal cosmic power” to three basic options. Cephalopod camouflage can be classified into only three basic patterns: uniform, mottled, and disruptive.

Uniform camouflage appears as though it were one color. For example, the left column of pictures depicts a cuttlefish that is generally a single color, beige. There may be visible spots of a different color, but they are very tiny.

Mottled camouflage involves the use of visible splotches of multiple colors. In the middle column of pictures, the cuttlefish uses splotches of black, white, gray, and beige in order to blend into a background of small pebbles.

Another reason disruptive camouflage might be effective is that it might serve to confuse predators just long enough to allow a cephalopod to escape. Look at the pictures in the Disruptive column. Can you tell which part of the cuttlefish is the head, and which part is the arms? It’s difficult, right?

For EACH student, you will need: 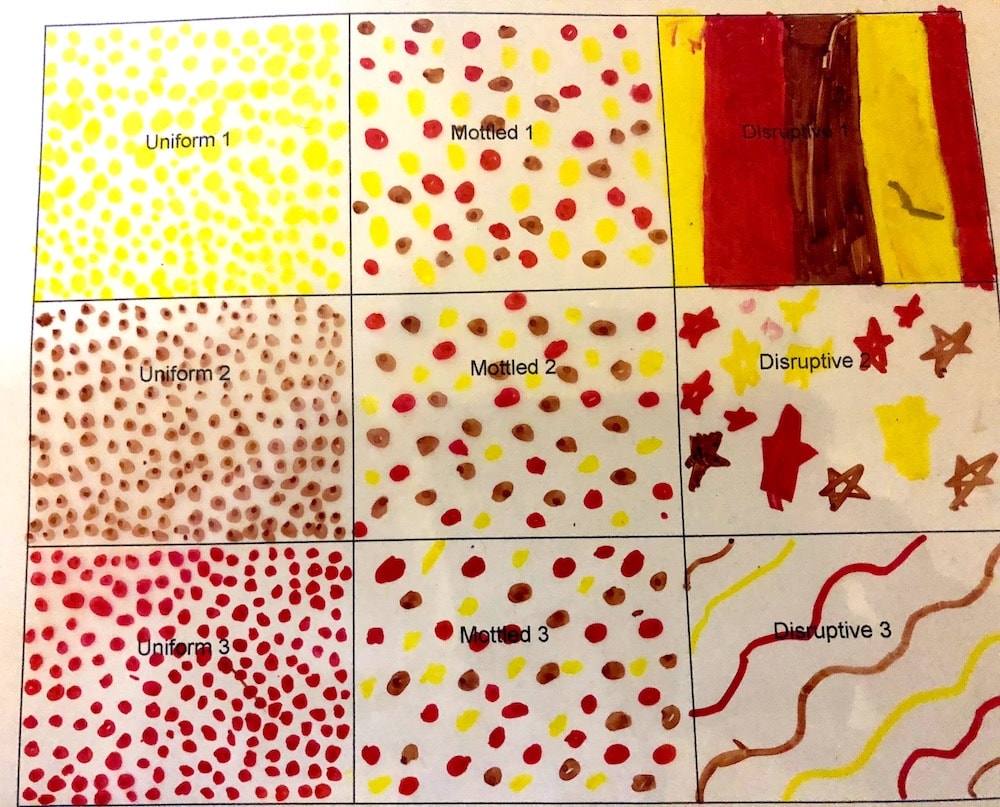 Place the template sheet into the sheet protector. Use the Sharpie pens to draw chromatophore patterns. Draw three Uniform patterns, three Mottled patterns, and three Disruptive patterns. You can look at pictures of the camouflaged cuttlefish above for ideas. One student’s examples are pictured above.

After you complete your chromatophore patterns, then please answer the questions on your Student Handout for Activity 2.

For EACH student, you will need:

You may have come to the conclusion that chromatophores are not as effective when camouflaging over blue or green backgrounds. Yet many cephalopods (particularly squids) are pelagic (which means that they live in the open ocean), and are surrounded by blue or green backgrounds all of the time. How do these cephalopods camouflage? Use this Student Reflection page to help you summarize how this layer is so important to cephalopods.

Next Generation Science Standards And Notes From The Field

4-LS1-1: Construct an argument that plants and animals have internal and external structures that function to support survival, growth, behavior, and reproduction.

Teachers who field tested this resource had the following advice for teachers adopting this resource:
Kristen from New Jersey says: Pre-open the umbrellas so that they are less likely to come apart when the kids use them.
Robyn from Arizona says: Break it into steps not just try and make it so that the lesson fits within 1-2 hours. We are in Arizona and many of my students had little or no experience with cephalopods which is what made this even more meaningful.

Special thanks to Tom Iwanicki of UH Manoa for his ideas and support during the development of this resource.

Randy Otaka is an elementary school special education teacher and robotics coach for Wahiawa Elementary School in Wahiawa, Hawaii. He has a passion for STEM education and implements interactive and engaging lessons, such as using Minecraft to model the cardiovascular system to creating scale model solar system orbital paths.

How Do ‘Killer Snails’ Kill Their Victims?

Model the hunting adaptations and a rich peptide venom cocktail of predatory cone snails in this exploration of the organism's structure and function.

Why Are Honeycomb Cells Hexagonal?

Honeybees make the cells of their hives in the shape of hexagons, but why?