This story is a part of Science Friday’s end of year celebrations. Explore the science news that defined the decade, read the best science books of 2019, geek out over a roundup of science board games, and join the festivities with us in person in New York City at our special event celebrating science news.

It’s the end of another year—which means it’s time for us to recommend stories by SciFri staff that we loved. This roundup has it all: an Appalachian species-themed bar crawl on Halloween, science-inspired poetry with the U.S. poet laureate, a visit to Canada to relearn the star stories of Indigenous peoples, and much more.

And if you want to make sure we can keep making amazing stories like these, consider giving us a donation below!

My favorite thing about this story is that it exists at the intersection between culture, art, and people by highlighting the importance of Indigenous peoples’ science. It’s not often—if at all—that I get to engage with content that highlights different ways of knowing and the cultural significance of acknowledging it. The piece also has stunning pictures and moving quotes.

I’m admittedly biased because I’m an expectant parent, but I found this interview with Emily Oster and Nikita Sood to offer some very tangible and honest advice about parenting, by talking about the science behind some of those crazy and too-often referenced parenting studies. Focused on fact rather than myth, this segment put things into perspective.

Despite the disturbing plant-on-insect violence, I learned a lot! I learned that Venus flytraps have pretty flowers, aren’t a tropical species but actually from the Carolinas, and eat things besides ants. Like all good Science Friday videos, it had me contemplating a question I hadn’t thought to ask: How does a Venus flytrap get pollinated, given its predilection for eating insects that cross its path (aka prospective pollinators)?

The Bitter Truth: The Taste Of Biodiversity
Jen Fenwick, director of institutional giving

I’m a food hobbyist, so I’m always experimenting with projects like canning, pickling, and fermenting. Now, I’m planning on trying my hand at bitters after listening to this segment. I enjoyed the guest scientists and mixologist and their conversation with Ira, of course. And one of my favorite features of this segment was listening to the stories and questions from our listeners. I thought the segment was a fantastic example of how we bring scientists and the public together!

We have discussions of ethics in STEM frequently, and this was no exception. I think that many people assume that technology will help us eliminate bias, but so often these algorithms create harmful justifications based on flawed systems of data. Ruah Benjamin was an amazing voice in the discussion, talking about the New Jim Code. I thought the segment was a great example of how we push to examine the social implications of technological advances!

I love cooking, and even more than that, I love cooking projects. In this episode of our Food Failures series, chef David Zilber gives home fermenters plenty of projects to try, and unpacks the science of fermentation in a way few chefs can. He also describes the magic flavors produced by the koji mold (I want some!) and throws out an analogy that likens home fermenters to bouncers, controlling the velvet rope outside a club. I laughed out loud when I heard that one.

This story about North Carolinians dressing up as local endemic species and going on a pub crawl is the Halloween content I crave. Come for the photos of a lichenologist dressed as a wandering globe snail (Mesodon altivagus), stay for the earnest celebration of the biodiversity of Appalachia.

I can’t get over this Methods piece. The story itself, plus the audio, visuals, and other media additions made me feel like I was right there in Antarctica with Ariel. It really brought to life the importance of these long-term studies, in places most of us probably never think about on a daily basis, and the amazing humans facilitating that work.

There is such a wealth of outstanding content to choose from this year that I’ve had a hard time narrowing down to one piece. So, I’m going to go a different route, and say that one of my favorite things this year is a new app that SciFri introduced, called VoxPop. It’s a way for SciFri to engage with you (our audience) during the week and incorporate your questions and comments into the radio segments. As a SciFri fundraiser, one of my most favorite things is hearing from our audience—learning about your interests, listening to your questions, and hearing what you like most about Science Friday. And I love the way our producers fit your voices into their weekly stories. If you haven’t already downloaded the app, please do—it’s free and it’s great to hear from you! 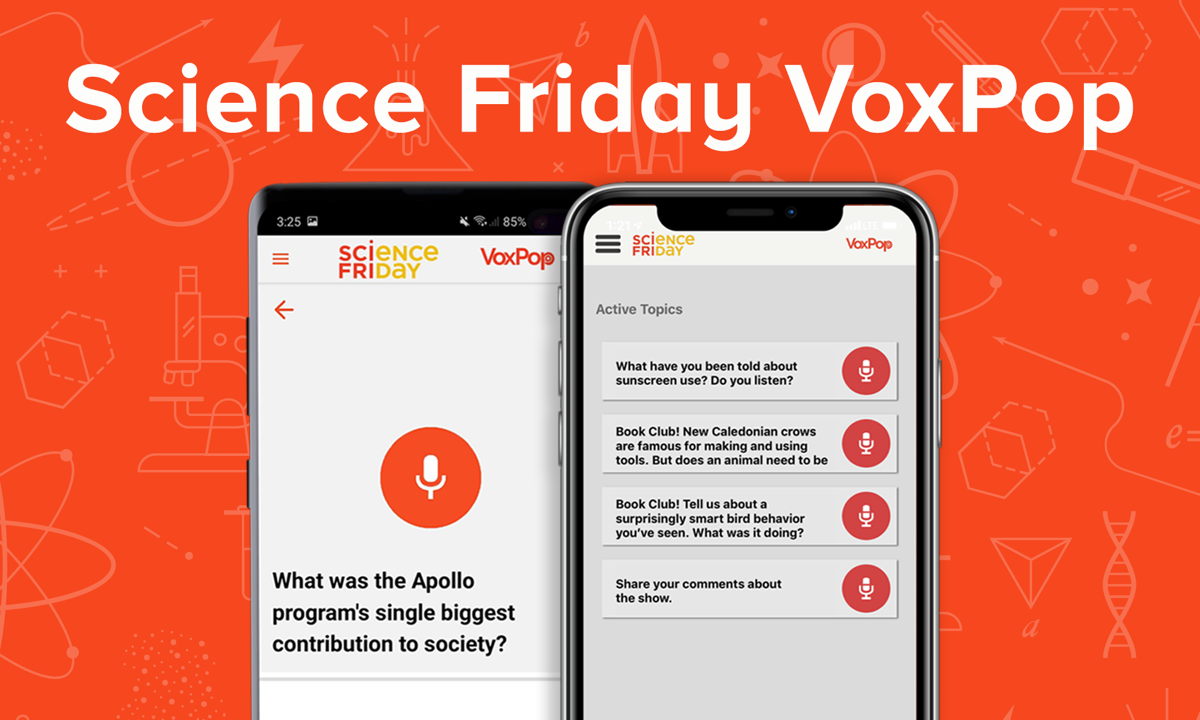 Every once in awhile, Science Friday takes a step back and examines the impact that science has on not-sciency things. This is a perfect example of one of those segments. U.S. Poet Laureate Tracy K. Smith and physician Rafeal Campo joined Ira to talk about their science-inspired poetry for April’s national poetry month. I loved Smith’s observation that writing poetry, like doing science, “is a kind of discovery process, so that by the end of [writing] the poem, I’ve learned something that I didn’t know.” So, come for the process talk about science-inspired poetry, and stay for the goosebump-induced on-air poetry readings.

Full Interview: Charly Evon Simpson On Behind The Sheet
Christian Skotte, co-director and head of digital

There’s a long and appalling history in this country of African Americans being used as unwilling test subjects in medical research. Marion Sims the “father of modern gynecology” was one of the doctors who contributed to this sad history. And while his name appears in medical school texts, most of the enslaved women he operated on are unknown. Radio producer Christie Taylor interviewed Charly Evon Simpson, the playwright whose play Behind The Sheet tells the story of those women. We didn’t get to air the full interview on Friday. But it was too good to not share with our podcast listeners.

These Launchpads Took Humans To The Moon. Will Rising Tides Bring Them Down?
Christie Taylor, producer

Sometimes it’s hard to connect to the specific losses we are poised to face under climate change, as the globe warms and seas rise. And sometimes, it’s hard to hope that we can do anything about those losses. I love this story because it touches on both: The physical history of space flight itself, the launchpads for the Apollo program, something that belongs to literally everyone, is at risk as the ocean threatens to take Cape Canaveral. Also, archaeologist Lori Collins is using the most advanced technology she has to digitally preserve these relics so future generations can still see them. It’s a story that gives us a very concrete sense of the stakes of climate change, and a bit of hope.

I never thought I’d see Genghis Khan, Julia Child, and gummy candies in the same story, but thanks to this issue of Science Diction, I was tickled to find out that they all have one thing in common: the five-second rule. Science Diction is a series that ventures deep through history to hunt for the scientific origin stories behind our everyday words and language. And in this installment, you embark on a quest to discover how the legendary food guideline came to be. First, you sit next to Genghis Khan at his banquet table full of food too special to go to waste, then watch Julia Child toss a fallen pancake back into a pan. Finally, you tuck in to a microbiology lesson and meet a researcher who has dropped everything from watermelon to gummies on the ground to put this rule to the bacterial test. After digesting the factual morsels in this Science Diction, I was left fascinated—and surprisingly hungry for some gummy bears.

This beekeeping story was so many little stories rolled into one, all charming and surprising. I loved hearing about the ways that honeybees forage, how they housekeep differently in wild colonies, and how they seem to do a better job fending off diseases and parasites. The beekeeping anecdotes from our listeners were hilarious, as were the swarm-capturing stories of NYPD officer and department beekeeper Darren Mays—he has a special vacuum reserved for the task!

From Usain Bolt and volcanoes to a kid scientist-to-be and caterpillars, the Science Friday staff share their favorite stories from 2018.

The Best Science Books Of 2019

Settle in for the winter with these enthralling histories, intrepid investigations, and thoughtful stories about the past, present, and future of science.